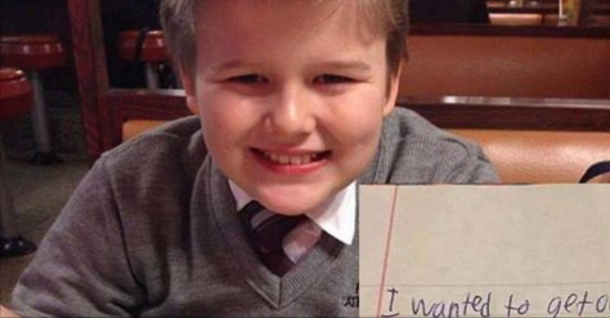 A 13-year-old boy wrote a heartbreaking letter about the bullying he experienced at school and the lack of help he received, before taking his own life.

Daniel Fitzpatrick was a student at Holy Angels Catholic Academy in Brooklyn, New York. The letter he wrote of the troubling experiences he had at the school was shared on Facebook by family friend Scott McGrath.

“Look at Danny’s smile, take a close look at his smile and think of how he was hurting, crying out for help and hiding his pain from all the bullying and fights against other children that were once his friends,” McGrath wrote on Facebook with a picture of Daniel and the letter he wrote.

In his letter, Daniel wrote of how at first his life at school was good — he had lots of friends and good grades. He then states that it changed when he moved and returned to the school. His friends didn’t talk to him anymore, and when one failed the sixth grade, as did Daniel, he says the boy began to bully him.

“Anthony took it out on me,” Daniel wrote. “He bullied me along with John, Marco, Jose, and Jack they did it constantly until I went into a fight with Anthony everyone stopped except John he was angry. I ended getting x-rays for my pinkie from John. I ended up fighting John and got a fractured pinkie.” 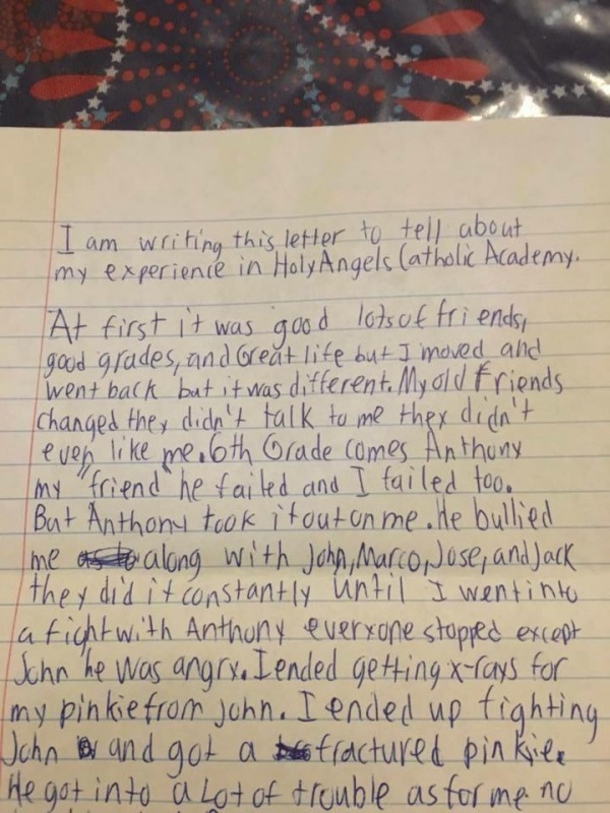 Daniel noted that John got in a lot of trouble for the fight, but he did not. Regardless, the bullying continued.
“I gave up,” he wrote. “The teachers either they didn’t do ANYTHING!”

Even the principal at the school did not help Daniel, according to the New York Daily News.
“I wanted to get out I begged and I pleaded eventually I did … I failed but I didn’t care I was out that’s all wanted,” Daniel wrote in conclusion.

Daniel’s parents said he wrote the letter in early July so someone would be held accountable. He was set to start a new school, Brooklyn’s Xaverian High School, in the fall.

“Mom I want them to know what they did to me and how I feel,” his mother Maureen Fitzpatrick recalled him telling her when he wrote the letter. “I want them to hear my story.”

The letter was written after Holy Angels Catholic Academy returned the family’s $100 re-registration fee, and recommended that he repeat seventh grade somewhere else. 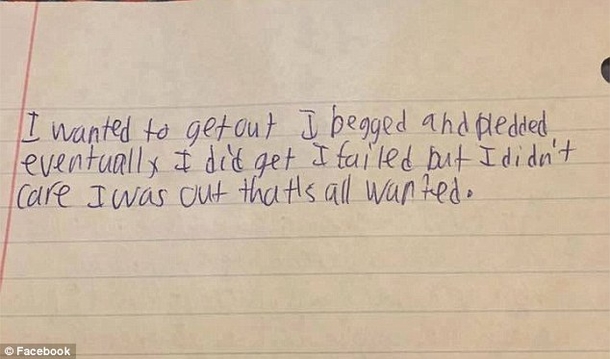 The principal of the school reportedly told the boy’s father, 45-year-old Daniel Fitzpatrick, that the school would not be a “good environment” for Daniel if he were a grade behind, and that it might “damage his psyche.”

His father believes the school is responsible for Daniel’s falling grades because they did not address the bullying.
“His grades went from passing to the low 40s and 60s,” he said. “His confidence was completely shattered.”
He also alleges one of the teachers called Daniel “lazy” in front of the class.

“My son shouldn’t have to die to be heard,” Maureen said. “There’s something wrong with the adults in authority positions when kids can’t go to them for help.”

“No parent is supposed to bury their child,” she added.
Daniel’s 17-year-old sister found him hanging in the attic with a belt around his neck on August 11.
She called for help, but it was too late to save the boy whom his family described as a sensitive softie.
Daniel’s father has a message for the bullies and their parents:

“You get to hold your children every night and every day for the rest of your lives and their natural lives. I don’t get that anymore. Your little monsters took that from me. And my wife. And his sisters. Danny was a kind, gentle little soul. He didn’t have a mean bone in his body… I just want to hear him say, ‘good morning, dad’ one more time and that way I could tell him ‘good morning’ and ‘I love you,’ which I did every every day.”