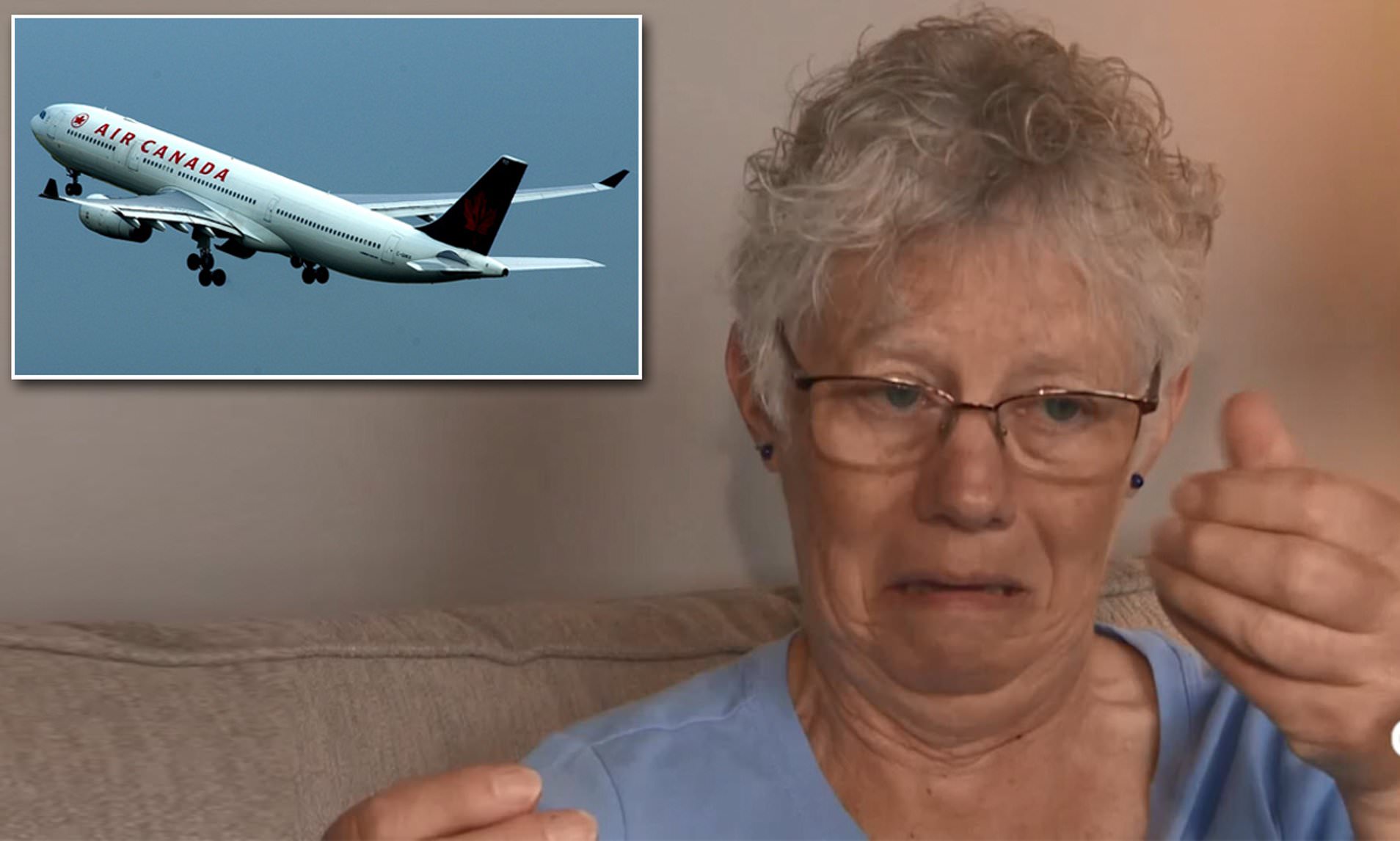 A 71-year-old grandmother asked a flight attendant a basic question, suddenly a chain reaction went off. Only moments later, she was being thrown off of the plane.  The airline has now given an excuse that has everyone boiling mad. This is horrible. 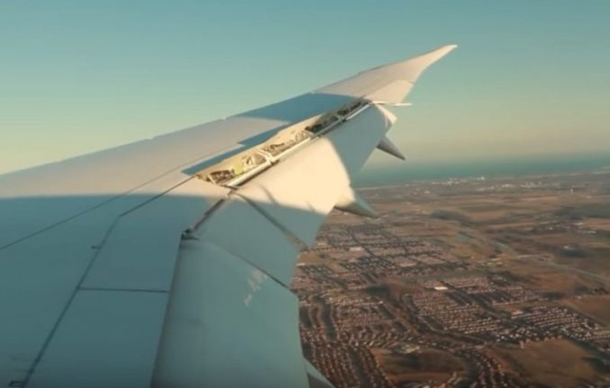 Ellen Flemming was on a flight when the plane and her world were both turned completely around. Ellen Flemming, 71, is a frequent traveler who has traveled on a plane many times without any issues. So she never thought she would get the response she got from Air Canada staff as she was on a flight to New Brunswick from Pearson International Airport in Toronto when she asked the flight attendant for one simple favor.

Ellen was traveling with her husband and two grandchildren when she asked the cabin crew for a simple service. It certainly wasn’t anything out of the ordinary. So, she never thought in a million years that the question would set off a chain reaction that would eventually see the plane and her life turned completely around. To her utter shock and horror, she was thrown off the flight and claims she was injured as a result. 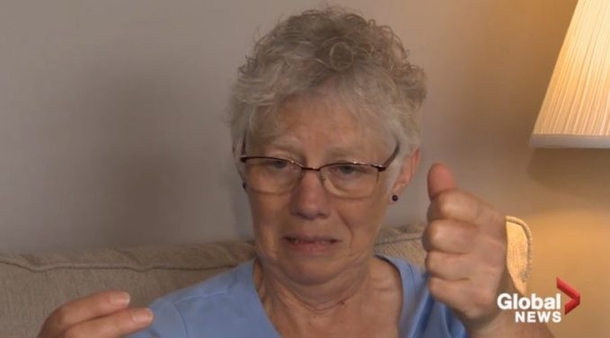 Ellen Flemming recalls finding wet garbage on the plane. Ellen told Inside Edition that the incident began after she noticed wet trash in the seat pocket in front of her. She called the flight attendant over and asked if he could remove it. Instead of helping, he immediately became angry and refused to do it. “He hauled himself up to his full height and said, ‘I’m a flight attendant and I don’t look after garbage,’” Ellen recalled.

The response shocked her, but she remained calm, staying seated and not making a scene. When she saw the food cart come by, she tried to dispose of the trash herself, but things quickly escalated. The flight attendant allegedly swiped her arm away, causing the trash to fly all over Ellen and her husband before hitting the floor, where she swiped it away with her foot. 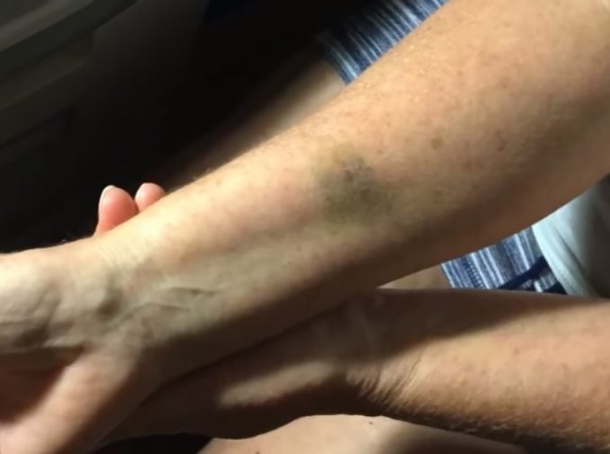 Ellen Flemming shows her bruise from being hit. (Photo Credit: YouTube)Ellen was surprised at the response and unjustified reaction, but she thought the situation was finished. Sadly, things would only go from bad to worse when, moments later, she heard the pilot say the plane had to turn around and would be returning to British Columbia due to an incident.

Ellen had no idea at the time that the “incident” was her. But, when the plane landed, she found herself being escorted off the flight by the police and told she would not be allowed to fly Air Canada again. She didn’t understand why. Air Canada’s reason didn’t do much to clarify things for her either. 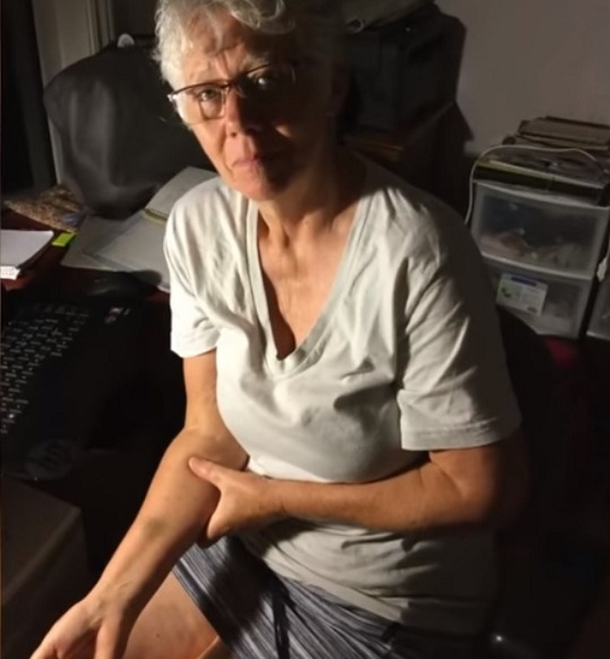 Ellen Flemming shows her bruise from being hit. (Photo Credit: YouTube)According to People, the airline alleged in a letter that Ellen “exhibited aggressive behavior toward a crew member; threw garbage on the food trolley; kicked a crew member when requested to wait until the member could come back and pick up the garbage as he was serving food.” But, Ellen says this is far from the truth, and other passengers have come forward in her defense, Fox News reported.

One such traveler is Helen Hollett, who says she sat opposite Ellen and her family throughout the flight. According to Helen, she did not witness the 71-year-old woman acting aggressively at all. Instead, she says it was the flight attendant who was “irate” and “screaming” during the incident, Global News reported. “The thing is most of the passengers on that plane didn’t even know what was happening,” Helen explained. What’s more, the police seem to share the same opinion and saw no reason to proceed with a case against the grandmother, saying no criminal offenses took place.

Let’s be clear. Passengers should respect the crew, but travelers should also be shown respect in return. And, this woman did nothing wrong. Instead, this all started because someone chose to have the “it’s not my job” mindset. Would it have hurt this flight attendant to just take the trash and better this woman’s trip? Furthermore, if it’s not their job to tend to the trash, why do they come around and collect it after passing out drinks on every flight I’ve ever been on?

If this particular flight attendant thinks it’s beneath him to throw away garbage for a passenger, he needs another line of work. He doesn’t sound like he’d make that good of an employee anywhere, though. If you are capable of doing something that makes a customer’s experience more pleasant, you should consider that your job, no matter how menial the task. This could have all been avoided if one employee had displayed that considerate mentality rather than an entitled superiority complex. Sadly, an elderly woman paid the price for his arrogance.