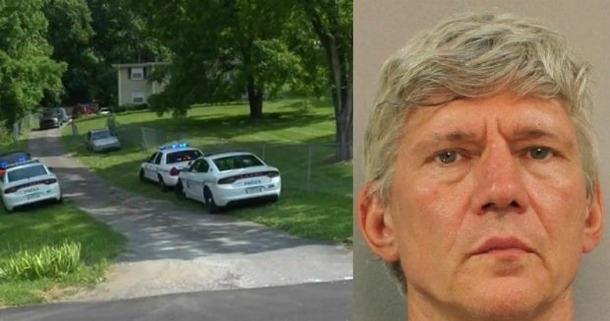 A contractor was called out to do some work at a single woman’s Tennessee home when a disturbing discovery was made in the master bedroom. The worker was running some wire when he heard a shocking noise and quickly called the police when he saw what was hiding.

The woman was wanting a security system installed on her wooded property in the town of Goodlettsville. She called ADT to come out and set it up. The company sent one representative to do the job when in the midst of the install he found the exact reason she wanted constant surveillance.

According to WZTV, the homeowner, who was not named, had been in a relationship with 52-year-old Tony Joe Gunter for two years, when she found out about his criminal past and called it quits with him earlier this month. Gunter didn’t take the news too well that she no longer wanted to be with him and became psychotic and obsessed. He even went as far as to say, “I will kill you, you stupid c–t,” when she said to never step foot on her property again.

Gunter found him lurking around her home on three separate occasions. Fearful about what he was doing, she got a protective order against him, but that’s not all. Knowing that a piece of paper wasn’t going to keep him away, she also armed herself with a gun and decided to get security cameras, which would come at just the right time.

As the contractor was at the woman’s house on Tuesday doing his job, the homeowner went looking for her phone that had been mysteriously misplaced. She went up to her bedroom to see if it was there when she saw two feet sticking out from under her bed that she knew belonged to her ex-boyfriend. Since he had hidden in her home before and threatened her life, she took matters into her own hands.

The woman grabbed her gun nearby and shot Gunter in the feet as to injure and incapacitate him until police arrived. The security installer heard what was happening and the woman yelling to him to call the cops, so he immediately dialed 911. Gunter was held at gunpoint by the woman until help arrived when he also admitted to police that he had her phone so that she wouldn’t be able to call the cops. Thankfully, she beat him to the attack.

Gunter was hauled off to jail with an injured foot and faces two felony charges of aggravated burglary and property theft, four misdemeanor charges of order of protection violations, and a misdemeanor stalking charge, according to Davidson County inmate records. The woman is not being charged for shooting him since she was well within her right to defend herself, knowing her safety was in imminent danger given the proven threat this man was to her.

Now that her surveillance system is in place and she’s not afraid to fire her weapon, she should be able to sleep well at night, knowing nobody is under her bed or in her home that she’s can’t take care of on her own. If all she had was just a piece of paper saying the guy couldn’t come near her, she would have been the one the receiving end of the gun.