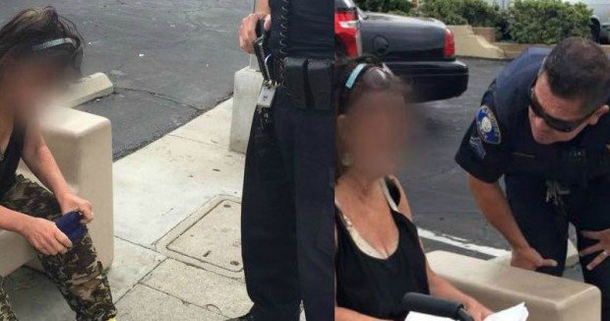 A Los Angeles area police department received several calls about a woman sitting on a city bench acting very unusal. Those in the area asked for an cop to be sent to the scene to do a welfare check on the person, as she was seemingly in distress and appeared to be wanting assistance.

A Glendora police officer approached and began questioning her. That’s when the situation took an unexpected turn.

Officer Danny Antillon responded to the call Wednesday, and when he went to the woman’s aid, he could see she was disabled, as there was a cane to her side. He looked down and noticed she wasn’t wearing any shoes.

Perplexed by her bare feet, he asked her where her shoes were. She told Antillon that someone had stolen them from her, so she’s had to walk a while without them, but couldn’t go any further since her feet were in so much pain.

With the tragic description of events and circumstances this woman endured, Antillon knew what he had to do and “quickly decided to take action,” a post about the incident on the department’s Facebook page said.

The officer looked across the parking lot and saw the Goodwill store. With his own money, he ran to the re-sell retailer and purchased the woman a pair of shoes. But he didn’t stop at her feet. According to KTLA, Antillon also provided this desperate citizen a jacket, bottle of water, and a bus pass so she could get home without the pain of walking. 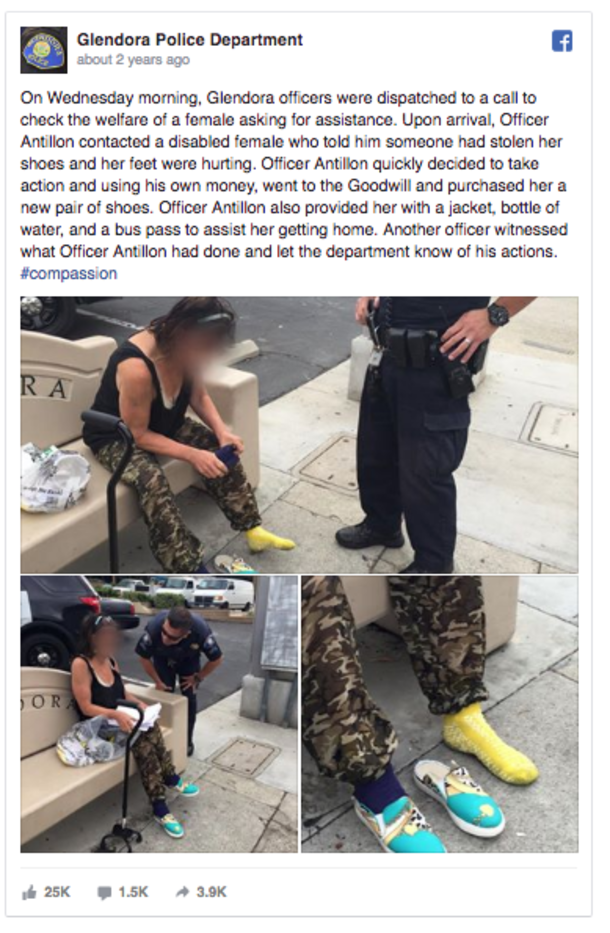 A separate officer had witnessed what Antillon did and reported it to the Police Department, who shared the photos from the good deed online. This officer’s selfless actions touched and inspired thousands, as the post was shared almost 14,000 times in under 24 hours.

This officer had a choice to make in the moment that he realized what had happened to this woman. Once he learned she wasn’t in immediate danger, just discomfort after an awful person stole this disabled woman’s shoes, he could have simply decided to move on to more pressing calls or do something to make her day a little better.

He chose the latter and did more for her than just give her a few necessities. By his caring actions, he showed her that she’s never alone, help is always a call away, and cops want to serve the people in their communities, not just enforce laws and write tickets.