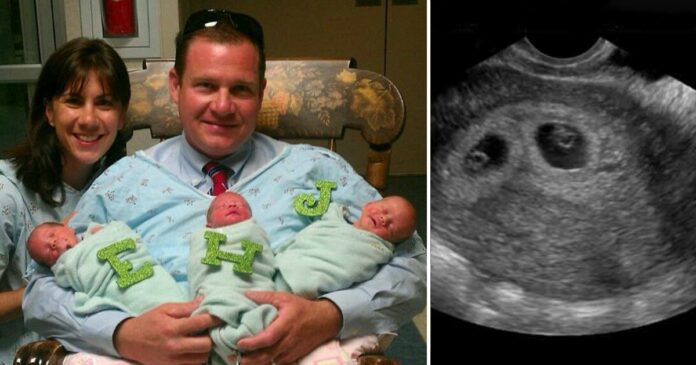 Everyone has known for a long time that if you want something desperately, it is bound to happen, but most likely not at all in the way we expect it, or at the time we plan. A couple from Tulsa. OK wanted to have kids so much, but Sarah and Andy Justice had no luck having a baby. The woman went for a checkup where she found out the disappointing news. It turned out that Sarah was infertile. Doctors said that she would not be able to bear a child on her own. The husband and wife began to look at alternative options.

At first they thought about. Artificial insemination through IVF. However, the procedure has many disadvantages. First, IVF is very expensive. In addition, the procedure does not guarantee a positive result, so the couple decided to adopt A child who had not yet been born in the United States.

It is common practice to discuss the possibility of giving the baby to the family who wants it from a pregnant woman intending to give up the newborn. Sarah and Andy tried several times to negotiate an adoption. But the woman refused at the last minute, not even telling them the reasons for the decision.

Finally, the couple who wanted the baby so badly managed to find a pregnant woman who agreed to give them the baby after the birth.

The papers were signed while the woman was still carrying the baby. But soon Sarah and Andy were in for a surprise. The pregnant woman who was supposed to give birth to their baby went to an ultrasound where she learned some unexpected news. It turned out that she was. Expecting triplets, Sarah and Andy weren’t expecting this twist, but they were immensely happy.

They really wanted a baby, and if there were three of them, even better. The triplets were born early. A boy and two girls were put in the ICU. The babies were perfectly healthy, but needed some time to monitor their condition so they stayed at the hospital.

The justices regularly visited their babies and everything was ready for them. The room, the baby carriages, and numerous. Maybe items and then on one of those visits, the woman suddenly collapsed right there in the hospital. It was good that there were doctors nearby who sent her to be examined. What happened next came as a shock to the characters of our story.

The Doctor Who examined Sarah determined that the woman was pregnant. Sarah told the doctor it was impossible because medics had ruled out the possibility of becoming a mother without additional procedures, but the results of the tests clearly indicated that Sarah was really expecting a baby. Of course, the couple was really shocked.

The relatives even hinted to them that they should give up the triplets who were still in the hospital. But Sarah and Andy didn’t even want to hear about such a thing. They were determined to raise all four children as their own, but very soon Sarah and Andy had another surprise waiting for them. When the woman went for an ultrasound scan, she got the startling news. It turned out that Sarah was expecting twins.

The ultrasound showed the woman was. Expecting a boy and a girl. So there were two more babies in the family. In total, Sarah and Andy had five children at once during a single year in 2014, and that’s even though the couple might not have had any babies at all. So the childless family became a multiple child family within one year.

Sarah admitted that it was a happy but also a very difficult time. She hardly slept constantly changing diapers and feeding the babies.

There was no time for anything else, but that wasn’t the end of the story as the kids got a little older.Sarah found out she was pregnant again and the family was joined again by a newborn baby. The couple didn’t even have any thoughts of giving up the baby as the father of a large family said, he has five little helpers growing up to raise the baby with them.

When the children were very young, it was very difficult to deal with them. The justices, friends, and relatives helped a lot, otherwise it would have been impossible to cope with so many kids. But Sarah and Andy say they have never regretted their choice for even a moment.

They wanted children so much. How could they refuse something they wanted so much as a result, the justice family had six children. This story proves once again that our strongest wishes always come true.