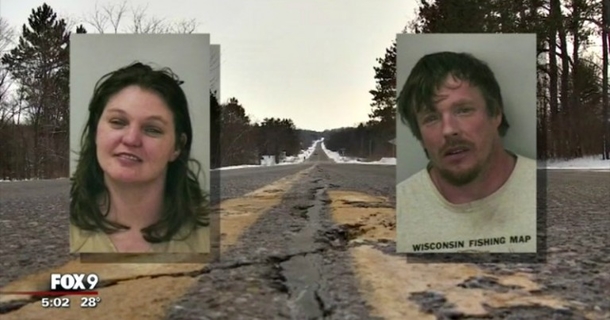 A Wisconsin cop got a strange feeling about a couple when he witnessed their odd behavior around town. What seemed like just another regular day, checking up on a couple of citizens, was anything but that.

What he found in their car was a first for the seasoned police officer. Pole County police received a call about Amanda Eggert and Jason Roth, who were acting strange on the road. The couple had just enjoyed hours of drinking and became a little loose with their whereabouts.

Eggert’s 9-year-old daughter and an 11-month-old baby were along for the ride, watching the mom get overly inebriated with her man of the month. Just when the older of the two children thought the night couldn’t get worse, it did, and she had been groomed into accepting it.

When the couple left the bar with the two kids, they cared more about preventing a DUI charge than they did the children’s safety. In one of many bad life decisions, the couple tossed the 9-year-old the keys, telling her to take the wheel and drive them all home. Fearing for her safety and knowing how drunk they were, the child got in the driver’s seat with the adults practically passed out in the back and the baby strapped into a car seat.

As one would expect, the girl wasn’t a very good driver. She could barely see over the wheel and was swerving all over the road. Another motorist became well aware of the danger and called 911, but it wasn’t until Polk County police pulled the car over that they realized a child was at the helm and a baby was in the back.

The hope to avoid a drunk driving charge instantly backfired with many more ramifications to face. These two degenerates should be charged with child endangerment and risk of injury to a minor, along with public drunkenness, DUI, and child abuse. But in their first court appearance on Friday, they pleaded not guilty to child neglect and reckless endangerment, KMSP reported.

Chances are, this isn’t the first dangerous situation these two, or at least the mother, have put the kids in. If given a second chance, it won’t be the last. Eggert has already proven that she’s incapable of being a responsible parent on even the most basic levels, and these two innocent children shouldn’t have to suffer through trial and error of her proving she can be better.