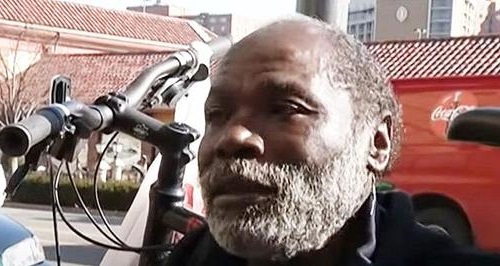 There are few better feelings than seeing someone get the help they truly deserve. These stories with happy endings deserve to be shared so others can feel inspired to act selflessly as well.

In 2013, a man from Kansas City, Billy Ray Harris, was homeless and living on a street corner when Sarah Darling accidentally dropped her wedding ring into his donation cup.

Harris had the ring appraised and found out he could receive $4,000 for it, but in the end, decided the right thing to do was to return it to Darling.

Darling and her fiancé, Bill Krejci, were so grateful and inspired by Harris’s honesty that they set up a page for online donations to help him get back on his feet.

Their original goal was $1,000 but they were able to raise nearly $180,000 in just six months. Donations came from people all over the world who were moved by Harris’s selfless actions and wanted to help him.

With the support of so many strangers, Harris was able to buy a car and put a down payment on a house.

The man is so grateful for the opportunity to get his life back, but even more so for the way all of this attention helped him reunite with his family. Harris’s siblings live in Texas and they had no idea he was still alive as they had not heard from him for 10 years. After seeing him on the news because of his good deed, they were able to reconnect and Harris is once again surrounded by loved ones.

Keep reading to learn more about Harris and his story of selflessness.

With all of the positive attention, Harris has remained humble. He said he was simply grateful and felt he was doing the right thing. “I am not trying to say that I am (a) saint, but I am no devil either,” Harris told Today in 2013.

Darling and her fiance see Harris as an angel for his honest actions. They wanted to give back in some way so they set up an online fund for him.“We set a goal for $1,000,” Darling said. “We set it up because a lot of people who had been touched by the story expressed interest in helping Billy Ray.”

Being homeless was hard on Harris, as it would be for anyone, and he was glad those days were behind him. “When I think of the past, I think, thank God that it’s over,” he shared. “I mean, I feel human now.” By the end of 2013, Harris had a part-time job and was getting to know his family again. His life radically changed over the course of the year.

Still living in Kansas City that year, Harris said he still sees some of the folks who helped him back when he was still living on the street and they were also impressed by his honesty. He said, “I still see some of the same people, but only now, instead of coming up and giving me change, they’re coming up shaking my hand and, you know, saying ‘hey, good job.’”

Harris is ready to enjoy the rest of his life now that the hardships of the past are over. “This is what they call the American Dream,” he said. “I want to thank all the people that helped me out. I want them to see where all their efforts, blessings and kindness is going.”