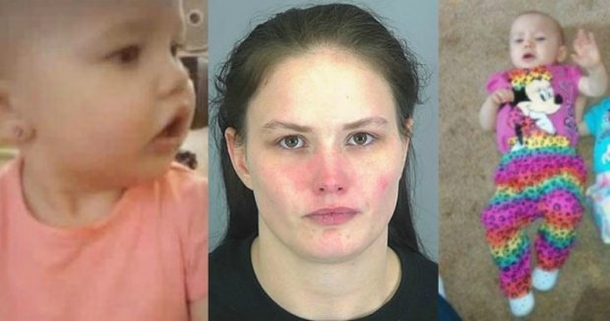 As a baby girl began to go into convulsing seizures, doctors were very surprised and horrified to learn that to discover that she was poisoned with a teaspoon of salt.

Once the baby died, the mom who was supposed to love and care for her has been charged with murder, after she confesses to killing the baby. Her reason for doing so left authorities & investigators sick to their stomach.

On Saturday, 17-month-old Peyton Martines was sent to a hospital near her Fingerville, South Carolina home, after she began having seizures without any history of the condition. The baby was very underweight and developmentally delayed, which was different than her twin’s health, as well as her older sibling, as we first reported on Wednesday.

After five days on life support, little Peyton lost her life to salt poisoning at the hands of her mother, who wasn’t admitting to her intentions until now. Kimberly Nicole Martines was initially charged with child abuse while her daughter was on life support after the dosage of salt she gave her.

That’s since been upgraded to homicide since she admitted to feeding it to her on purpose as well as the motive. According to Solicitor Barry Barnette, Kimberly was separated from her husband and desperate to get him back, and she thought that poisoning one of their three kids would do the trick.

In the sadistic mother’s words to investigators, she was trying to “get her husband back into her life.” Perhaps she didn’t realize that the salt would actually kill Peyton, hoping to just cause some sickness and a hospital stay for sympathy, or the intention was to take her life from the start. Either way, she’s not getting her husband, kids, or freedom back, as she sits behind bars and awaits her fate.

A punishment that’s anything less than life in prison would not suffice for what she forced on her baby. In addition to the poisoning, refusing the referral that her pediatrician offered to get the baby’s health back on track almost a year ago, was abusive. However, her apparently enabling family has come to Kimberly’s defense, insisting that she’s a “great mother” who would never hurt her children, KTLA reported. The evidence and her own admission prove differently.