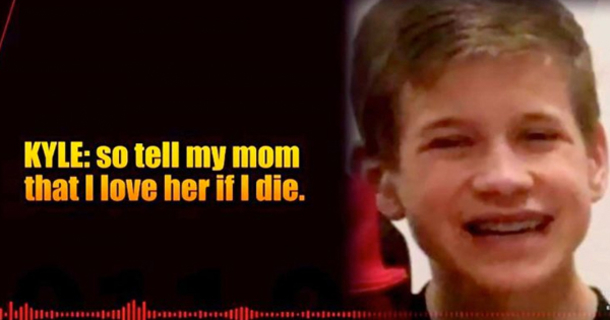 I remember when I was in the fifth grade, I recall a group firefighters coming into my class to speak about safety. They taught us key things like about stop, drop, and roll, but they also urged us to call 911 if there was ever an emergency. No matter if we were sick or hurt, I learned that the emergency dispatchers and first responders would be ready to help.

And based off the things I have seen, they always do help. However, when 16-year-old Kyle Plush called 911, he experienced something different. Now his heartbroken mother and father want justice.

Kyle was searching through the minivan’s trunk behind the seat for sports equipment when a freak accident occurred. He somehow found himself blocked by the van’s seat with no one around to help him. Instead of panicking, Kyle did the intelligent thing. He used the voice-activated service on his phone to command his device to call 911. He made the call not once, but twice.

Kyle gave the dispatcher everything they needed to know. The details of his location were spot on and accurate. But not only did he give the location where the emergency crews could find him, but he also gave them his last wishes and a message for his mom. The oxygen in the trunk was running thin, and Kyle was worried.

Instead of respecting Kyle’s call, the 911 dispatcher did something unexpected.
Kyle’s first call was passed on to the Cincinnati Police Department. But his second call was identified as a prank. Because the officers thought a high school kid was pulling their leg, they briefly looked around the high school parking lot at Seven Hills School before they called off the search and moved onto “more important things.”

Meanwhile, Kyle was dying. He was trapped in the van and needed someone to help him. Unfortunately, the 911 dispatchers thought he had lied to them about his plight.

Kyle begged the second dispatcher, the one who called him a prankster, saying: “I probably don’t have much time left, so tell my mom I love her if I die.”

Kyle tried to be patient. But he died when the oxygen ran out.

Because the officers completely ignored the second call – thinking it was a prank – they did not give his first call any respect. And as you can see in the video below, the Ohio cops never left their cruiser to check for the boy.

By the time Kyle’s parents realized their son was missing, he was dead. But they did not know that. His father went searching for his son. First, he called his boy’s cellphone but did not get an answer. That’s when dad took matters into his own hands and went searching.
Now his parents want justice. Their son had done everything right. He had only called 911 when there was an emergency. And he only called twice because he was in dire need of help. Now he’s gone, and his parents plan to take action.
Watch the video below to see what they’re going to do.

What do you think should happen now that the video evidence has been released?