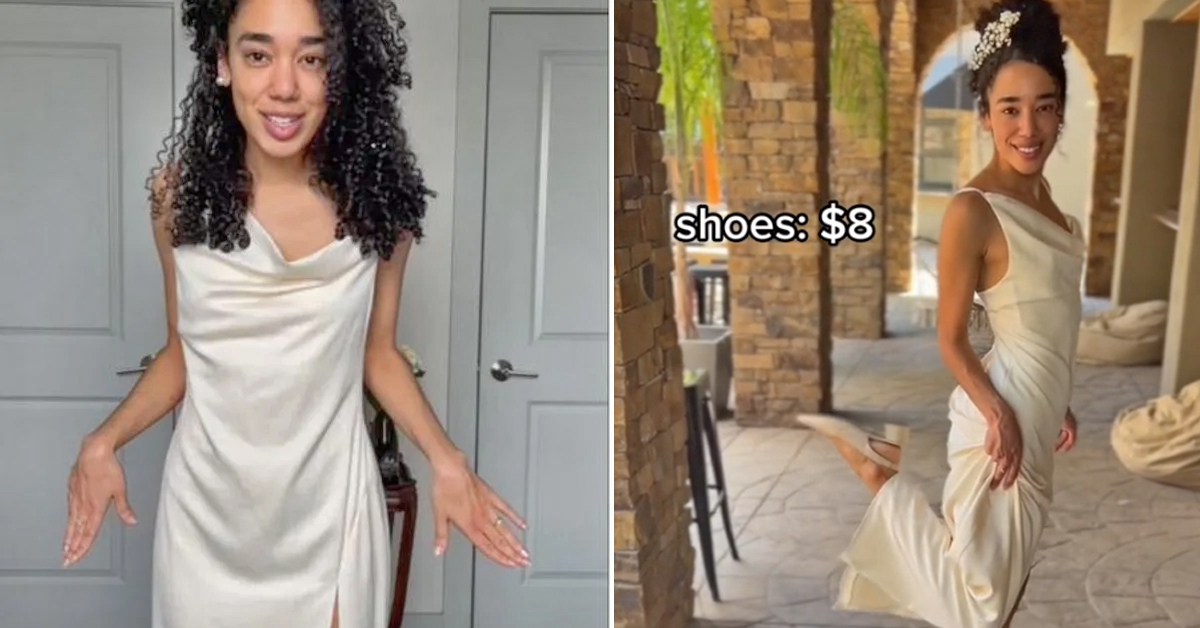 The bridal store is usually the first stop for brides looking for wedding dresses, but not Jillian Lynch. Hers was the thrift shop.

“Because I thrift all the time, it was just the option,” she told Insider. “I never even considered going to a bridal shop.”

After planning her intimate wedding, Jillian, 32, decided she wanted to wear a white dress on the big day.

Jillian shared that she and her boyfriend of 13 years didn’t picture themselves tying the knot until the spring of 2021. She said they planned on being life partners, but didn’t feel like marriage was necessary.

“I don’t know what changed, but about a year ago, we were like, ‘Let’s be husband and wife,’” she said.

Jillian and her groom knew they didn’t want a big wedding, so they planned a 30-person micro wedding at the Social House in Tempe, Arizona, where most of their friends and family live.

After choosing a venue, Jillian started shopping for clothes she would wear at the event.

“I just started looking for dresses, not wedding dresses, but simple white dresses. I didn’t want anything too formal,” she said.

An avid thrifter, Jillian kicked off the search by visiting second-hand shops. And after four days of shopping, she found a Camilla Coelho dress, which still had tags on.

The white, mid-length, slip dress features a daring slit and an asymmetrical neckline. It was stunning as is.

But best of all, Jillian only had to pay $3.75 for it. It’s definitely a steal because the same dress is currently available on Revolve for $220.

Jillian posted a video of herself wearing the dress on TikTok, where she said she was unsure if she would wear it to the wedding.

But after seeing plenty of positive comments from viewers encouraging her to use the gown, she was convinced to make it her official wedding dress.

After getting feedback on TikTok, Jillian tried the dress on a few more times and fell more in love, saying that she felt “really pretty” in it.

“Brides tend to go wedding dress shopping with their mom, their bridal party, or a group of people to get feedback,” she said of sharing her dress shopping journey on TikTok. “It felt a lot like that.”

Jillian had the dress tailored to ensure a perfect fit during the wedding day. She had the waist taken in, the adjustable straps swapped with custom straps, and a bit of lace added at the top of the slit to tone down the look.

The alterations cost her $110, which means she spent a total of $113.75 on her wedding dress. Jillian also found Visanze Collection wedding shoes that she thrifted for $8.

“I don’t think I’ve ever felt that great in something,” Jillian said. “That’s what brides should feel on their wedding day, like they’re at their peak beautiful self. That’s exactly how I felt when I put it on.”

Jillian also didn’t spend a dime on her hair and makeup for the day because she did it all herself.

Although she didn’t spend years dreaming of this day, she surprised herself by loving everything about her wedding, even the traditional parts.

For instance, Jillian asked her dad to walk her down the aisle.

“I could see how much it meant to him, and it actually ended up meaning a lot to me,” she recalled.

She and her groom also focused on just enjoying the day, feeling the excitement of beginning this new chapter in their lives.

“We rolled with everything,” she said. “We were together, just having a fun day versus trying to make this planned event go well.”