A California mother was outraged when she put twenty-five cents into a vending machine at a Mexican restaurant on Monday. The quarter operated machine dispensed an awful “prize” for her son, and now, she is warning others about this incident.

According to the Bell Gardens Police, the vending machine was dispensing toy putty balls filled with cocaine. “While her son was playing with the putty ball toy, it ruptured and a white powdery substance came out,” said Detective Miguel Torres.

Officers showed up to the Taqueria Los Altos restaurant, where the event unfolded, with a drug-testing kit, which they ran the powder through, and a total of 136 grams (4.8 ounces) of cocaine were ultimately removed and recovered, according to the detective.
Perhaps even more disturbing, the toy ball had a smiley face on it, which is enticing to young children.

The mother called police, who determined the white powder tested positive for cocaine. Detectives examined the machine and seized a total 4.8 ounces of cocaine.

Police said a phone number on the machine returns to a company calling itself Snack Time Vending. Investigators are asking any businesses using the company’s machines to remove them from public access and contact police. [Source: Breitbart]

“We contracted with this company for the past couple years, but no way are we affiliated with this company,” commented Alfredo Sanchez, a spokesman for Taqueria Los Altos, in a statement provided to CBS Los Angeles. “We only lease the location to the company.” 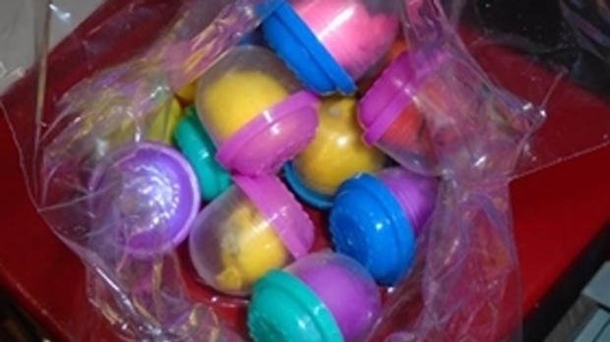 As if parents didn’t have enough to worry about while bringing kids up in this day and age, now we’ve got to make sure the toys our children get out of vending machines aren’t laced with cocaine. Fortunately, the little boy was not seriously harmed by the drugs in his toy ball, as his mother acted quickly when it burst. However, if he had not been closely supervised, he might have ingested the cocaine, causing a slew of other problems.

It’s easy to imagine how this story could have ended much worse. Had the mother been distracted while eating her meal or chatting with other people at her table, her little boy might have had ample time to give the white powder inside of his toy a taste, perhaps thinking it was sugar or something else.

Children tend to put everything in their mouths, including their toys, so parents cannot be too vigilant when it comes to what they allow their kids to get their hands on. If you did not receive a toy from a trusted source, it probably isn’t worth the risk to allow your child to play with it. Sadly, vending machines cannot be trusted by parents concerned for the safety of their children any longer.