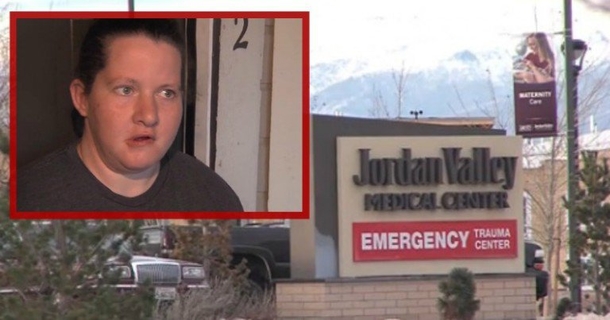 An 8-year-old child wandered into a Utah hospital alone, without saying a word, and handed the staff a note. As they read what it said, they were left in complete shock about the circumstance, only to be made worse by a marking on the child’s arm. That’s when they acted fast to find the person who was responsible for the sickening situation.

Wearing nothing more than the little amount of clothing on his back and only holding a tattered note, the little boy stumbled up to the counter and slid the message over to the first person he saw. The staffer acted fast on behalf of this abandoned boy, after the disgusting things his mother said about him in the short letter.

According to KSL, the boy’s 36-year-old mom, Kathy Sherrer, admitted to writing the note because she had simply had it with this kid and was too busy taking care of her three other children to manage the “ungovernable” middle child anymore.“This kid is rude and ungovernable!” Sherrer’s note read. “I do not want him in my house at all!”

However, that wasn’t the only issue. Days later, when police tracked the woman down at her house in West Jordan, they discovered more to the sickening story inside the family’s home.

The note also described the “failings” of the child and gave his name, along with stating that he needed more help than she could give. The mother, having four special needs kids, claims that she’s overwhelmed and refuses to be this boy’s parent. She thought she was going about getting rid of him the right way by taking advantage of Utah’s Safe Haven Law, but she clearly had no understanding of how it really works.

You can’t just abandon your child of any age at will, as the law for surrendering your child at a hospital applies only to infants. Older kids could be taken to crisis centers in circumstances like this, but that was more than this mom could manage. Now, she’s getting her wish with this kid being gone from her home, hopefully for good, along with a side order of charges she wasn’t expecting.

Upon inspection of the boy, authorities found a strange bruise on his arm, which he said was the result of his mother having hit him with a spoon as punishment. When they found her, she was forthright about the allegations.

On Wednesday, over two weeks after kicking her child to the curb, Sherrer was charged with child abandonment and child abuse. Her son, who she didn’t want, has been in state custody since the incident, with no urgent plan to give him back to his defunct mother, which she’s probably pleased about.

In the meantime, child protective services needs to take a closer look at the other kids who are left in the care of this unstable woman. It’s not indicated whether or not all the children are biologically hers, if they are fostered or adopted, or even if there is a father in the home. Chances are, the 8-year-old isn’t the only one on the receiving end of her instability, and there is probably more going on inside her house that’s gone ignored for too long.

Some people simply aren’t capable of caring for kids, and Sherrer is one of them. Anyone ignorant enough to just drop their kid off with a note, saying they are done with them, needs to be stripped of all their parental rights for every child in their custody.