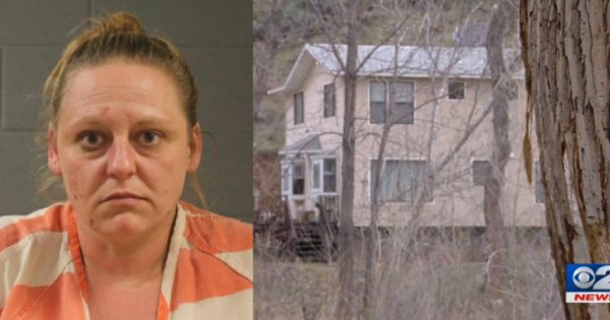 Over a year has passed since 36-Year-Old Brandy K. Jaynes’s son Father has seen his child, so he decided to drop by Toquerville, Utah for a little visit. Once he stepped in the house he say his ex’s two other children but didn’t see his son.

He kept looking around until he discovered where his son was. What he saw left him and investigators sick to their stomachs.

For reasons unknown, the son’s dad went to the house and discovered his 12-year-old son, who weighed just 30 pounds and looked like the victim of a concentration camp from World War II, Washington County Lt.

David Crouse said, according to Fox59. The child was emaciated and couldn’t even stand up, let alone walk, for being so frail. The other children in the home said the last time they even spoke to their brother was six months ago, the

Jaynes apparently didn’t want to have to deal with all three kids, and instead of letting the father take the 12-year-old, she locked him out of sight in a blacked out upstairs bathroom with no food or water and several layers of duct tape over the light switches so he couldn’t turn them on.

Investigators suspect that she kept an eye on him through a surveillance system connected to her phone, noting that the children spared her abuse said they had seen their brother in the bathroom on their mother’s phone. However, they soon forgot about him since they didn’t even bother going to the door for six months, nor did they think to report the obvious issues to anybody.

“According to deputies, Jaynes told them the boy was locked in the bathroom because he wanted to sleep in there and she locked him inside for his ‘safety’ when she left home,” Fox59 reported.

She’s now been booked on aggravated felony child abuse which seems like a slap on the wrist for what she did. At the minimum, she should be hit with attempted murder since locking this kid away with nothing in a dark bathroom for a year could clearly lead to his death, which she probably wouldn’t have been disappointed about.

Please share the story and tell us what you think!