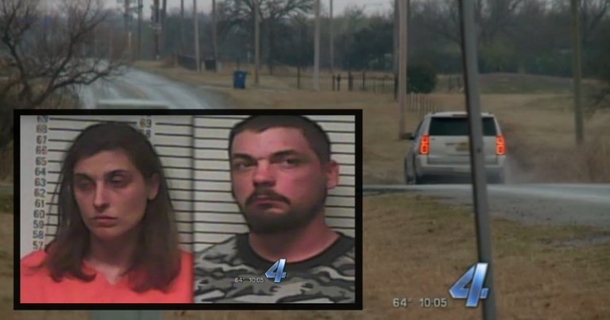 Officers patrolling a rural stretch of road in Oklahoma late one night saw a suspicious car strangely parked along the side. They became concerned when they noticed something pouring out of the vehicle, but what was inside was far worse.

There had been reports of a car driving erratically through the town of Duncan, which ended up being the same car that was found on the side of the road just after 1 a.m. Officers approached the car when they noticed what looked like smoke seeping out of the ride.

They tried to get inside, but all doors and windows were locked up tight, and nobody inside was quick to open them up when cops knocked on the windows.

With so much smoke filling the car, making it impossible to see inside, police feared that there was a fire. When they made their way inside, they were smacked in the face with the wretched smell of what’s known as K2, a highly dangerous form of synthetic marijuana. However, that wasn’t the worst of what they came across.

Tabitha Derryberry and her husband Chance Derryberry had been “hotboxing” their car while driving into oncoming traffic with their two children in the backseat, ages six and three. Both kids were found unconscious from having inhaled such an immense amount of the drug, and the youngest of the two didn’t have pants on and had defected on himself.

“They had taken in so much of the smoke that was in the car, inhaled so much in their small lungs, that they were completely overcome by this substance,” Officer Wayne McKinney said. His description of what he witnessed from the children’s parents sounded like something straight out of a scene from a horror flick.

The couple had become so high on the drugs that they were “zombies,” unable to walk or talk, and they certainly couldn’t recognize the magnitude of what they had done to their children, KFOR reported.

The two deplorable parents were arrested and are being held on $1 million bonds, facing four and five charges each, including child neglect. The children were immediately taken into state custody and will need to detox off this disgusting drug that their parents forced them to consume, which hopefully won’t have lasting effects. Sadly, this probably isn’t the first time they’ve been subjected to it.

Even if the Derrberrys see the light of day again, outside of a jail cell, they should never be given access to their children again. The damage is already done, and on the very slim possibility that they would ever turn their lives around, the chance of being parents to these two kids should be gone forever.

It’s going to take some time to correct all the detriment that their sickening actions have caused these kids. Being faced with these two monsters again, at any point, would undue everything positive to come from their absence and would be abusive in itself. All we can hope now is that this couple’s cellmates treat them with the same amount of love and care as they showed their children, who nearly died in the hotboxed car.