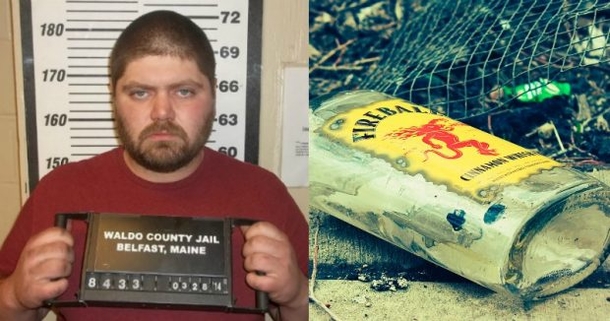 Authorities in Maine responded to a call from a good Samaritan who was concerned about some strange activity at a neighbor’s house. When officers arrived, they were horrified at what was hanging around the kids’ necks, which was only made worse when they realized what some nearby Fireball Whisky bottles had been used for.

When authorities were called out to 30-year-old James Kuhn’s house, they weren’t expecting to find what was a first for these seasoned veterans for the force. Although they charged him with a crime, he was soon released and back to doing whatever he wanted when they were called out to his house in the town of Belfast again, this time discovering that Whiskey wasn’t just for drinking.

Two years ago, Kuhn was taken into custody when police found that he controlled his young children by use of shock collars. He forced them to wear the painful devices for dogs and apparently found joy in shocking them for fun or when the little ones acted out.

After he was released, he was sent back home with the kids, who had to endure far more of their father’s alarming antics until a concerned citizen called in a request for an investigation after what was found on the property.

According to the Bangor Daily News, Kuhn’s 7-year-old confessed to the neighbor that the injuries all over his body were from some “black powder that went poof/boom.” Unsure of what he meant but seeing the marks all over the little boy, the neighbor called the cops to say she suspected illegal explosives. When investigators arrived, they found that Kuhn had been making explosives using empty Fireball Whisky bottles and setting them off right next to his children.

The derelict father was arrested, this time on charges of criminal use of explosives, reckless conduct, and endangering the welfare of a child. It’s unclear if he’s so ignorant about cause and effect that he doesn’t recognize the real danger he’s putting his kids in or if he’s trying to hurt them. Someone needs to put a shock collar around his neck and set some whiskey bottle explosives off around him all at once as the only appropriate punishment for the crimes he committed on his kids.