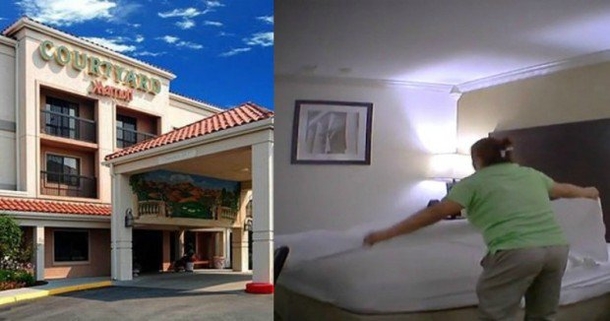 A couple had just checked into a Courtyard Marriott hotel, exhausted and ready to get some sleep, when they climbed into bed and heard something crinkle beneath the bottom sheet. The couple peeled back the bedding to see what it was, and they were left utterly disturbed by what they found.

Hotels are often host to many horror stories from seasoned travelers, who have seen and heard their fair share of bothersome situations. Noisy neighbors or strange personal belongings left behind under the bed are among what’s typically complained about, but what this particular couple found had them quickly calling management and demanding a change.

The Marriott guest found a note under the fitted sheet, which had been left there by a previous guest as a warning to those who stayed there. Posting a photo of it on social media, the note let the guests know that they were sleeping in someone else’s filth. 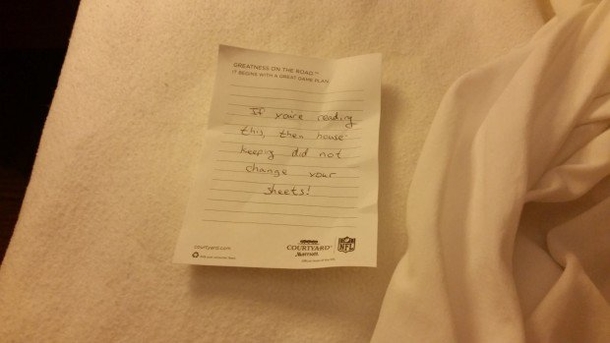 “If you’re reading this, then house-keeping did not change your sheets!” it said, showing that if housekeepers had done their job, they would have removed the note with the sheets to wash them. Instead, they just remade the bed, and without a date on the piece of paper, there was no way of knowing how many hotel guests had used the unclean sheets before this couple got there.

This little trick proves that the sheets may look clean, but who really knows when the last time was that they were washed. Hotel executives don’t even try to hide the fact that housekeeping doesn’t always provide proper service that people pay for, excusing failed tasks as “human error” that people should expect, the Today show reported.

Now that this couple’s note got out, so has the idea for other travelers to provide the same courtesy for guests who come after them. Many have said that they will date their note, as to show exactly how long the filthy sheets have been left on that bed. This is a great idea to hold hotels accountable and not allow room for excuses as to why their employees didn’t complete the most basic part of their job.