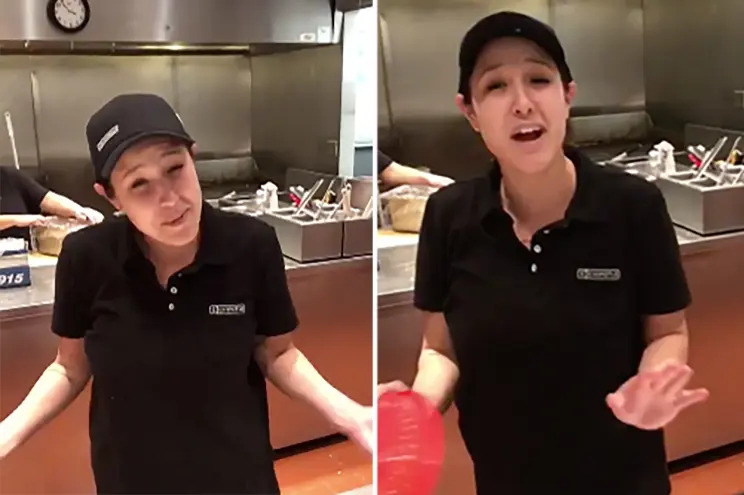 Dominique Moran, the manager of the St. Paul Grand Avenue Chipotle, was fired for refusing to serve five Black men, an incident that was caught on camera.

She was offered her job back later, but she stated that she was shocked Chipotle fired her, and she has yet to decide if she’ll go back.

She said, “I was obviously trying to do the right thing. I told Chipotle to tell the boys I say sorry. … I didn’t think I would lose my job, I thought I did something good by standing up for my people.”

She was fired for not following company policy, which maintains that customers shouldn’t be asked to pay for their food before ordering.

After reversing course on its decision to fire Moran, Chipotle released a statement saying that it spent days reviewing all the available evidence.

“While our normal protocol was not followed serving these customers, we publicly apologize to our manager for being put in this position. We will work to continue to ensure that we support a respectful workplace for our employees and our customers alike,” the statement read.

21-year-old Masud Ali, one of the men involved in the incident, stated that he and his friends had been racially stereotyped.

“You gotta pay because you never have money when you come in here,” Moran is heard saying in the beginning of the video.

According to Moran, her crew members recognized two of the men from the previous night. They’d claimed that they didn’t have money to pay for their food, which Moran stated had happened many times.

She stated that she didn’t know she was being recorded at first, and regrets using the word “never.” However, she wanted to ensure that they paid for their food this time.

Moran stated: “It was really frightening to be honest. From our point of view, we had five cameras on us.”

She said that the employees were tired of dealing with the men, and “I think the anger came out of me. I was scared and panicking. I didn’t know what to do so I called the police.”

Ali and his friends shouted at workers and a customer who’d gotten his meal.

Some of the footage of the incident was posted on Twitter, and one male staff member is heard telling the group: “We’re not going to make food unless you guys actually have money.” However, other customers were allowed to order food first and pay last.

“I should have been more clear that they were denied service. I never meant, ‘show me your money,’ but more like ‘please pay for your food,’” Moran said.

Ali reportedly posted tweets between 2014 and 2016 repeatedly joking about dining and dashing from restaurants, including Chipotle. The tweets have since been deleted.

Chipotle released a statement acknowledging that it was aware of Ali’s tweets, saying: “Our actions were based on the facts known to us immediately after the incident. We now have additional information which needs to be investigated further. We want to do the right thing, so after further investigation we will retrain and rehire if the facts warrant it.”