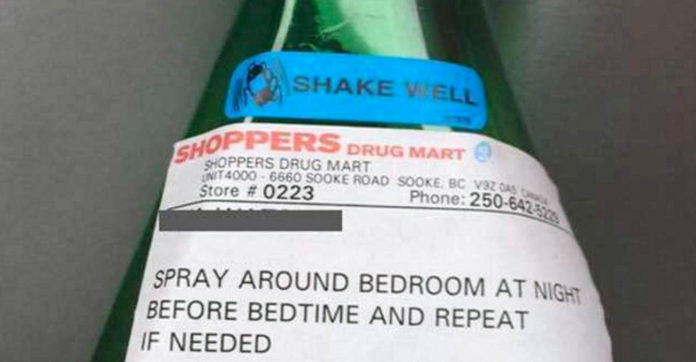 Most kids go through a phase where they’re constantly terrified of monsters under their bed, hiding in the closet, or lurking around dark corners of the house. While they will eventually outgrow it, when they’re young, it can cause them so much genuine fear that they refuse to sleep at night!

Little Mya, who’s two years old, was one of these kids, and I say “was” because her dad found an adorable and ingenious solution to help her face her fears.

After weeks of Mya having difficulty sleeping and her parents trying different methods to no avail, Dad took a trip to the local pharmacy and asked for a very professional and official looking label.

The label, which would go on to be stuck onto a bottle containing plain water or water mixed with a little lavender scent, read “Monster Spray”, and included instructions on where and when to spray. Accompanied by some warning stickers, it definitely looked real enough to satisfy Mya, and it took the Internet by storm! It’s safe to say that many parents are going to be using this method.

Now, Mya brings the spray along with her and is bravely fighting off every monster she sees. She’s turned the tables on those scary creatures, and now they’re the ones running in fear from her! Share away, people!