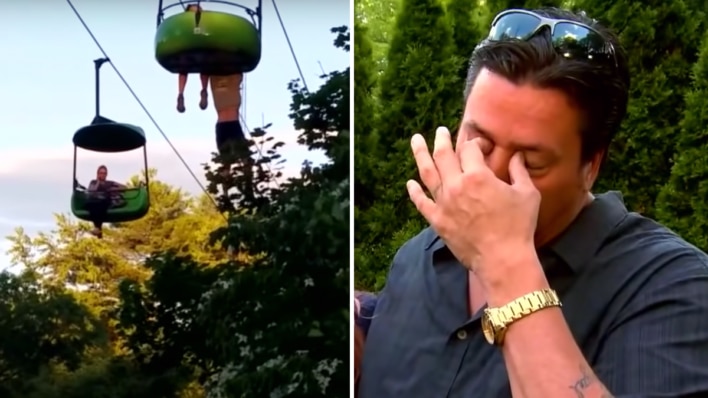 Just when it seemed that nothing could spoil a day of family fun at a Six Flags amusement park, disaster ruined the ride.

A day of games and cotton candy was winding down when 47-year-old Matthew Howard Sr. and his family were startled by the sounds of frantic screams.

How A Brave Father Acted Swiftly To Save A Falling Girl

Per CBS News, when he looked up, Howard saw a 14-year-old girl dangling about 25 feet off the ground from a gondola ride. Her little brother was in the pod next to her, crying that he couldn’t hold onto her much longer.

Driven by paternal motivation, Howard and his 21-year-old daughter, Leeann Winchell raced to position themselves under the girl with seconds to spare.

In a leap of faith, the girl let go and landed in Howard’s arms who took the brunt of her fall. She was immediately placed into a golf cart, and sent to the care of emergency workers on site.

The girl’s recovery was a success, as she had no serious injuries. Howard, on the other hand, was treated for a minor back injury after the rescue.

Howard and his daughter later visited the girl in the hospital and said that she was in good spirits.

The video of the rescue went viral, with over 13 million views, 140,000 likes, and over 5,000 comments. Many applauded Howard’s sacrifice.

“This guy is amazing. He’ll probably be dealing with back issues for the rest of his life, and I’m sure he knew that as he was encouraging her to jump into his arms,” wrote one.

It takes a BIG man with a BIG heart to pull something like that #Respect.

How One Father Proved That Importance Of Displaying Courage

In a prepared statement, a Six Flags official said, “There does not appear to be any malfunction of the ride, but we have closed the attraction until a thorough review can be completed.”

Looking back on that manic moment, Howard says that his motivation was simple.

“I couldn’t let that little girl die. No one wants to put himself underneath a body like that, but I couldn’t stand by and watch,” he said.

On that day, Howard found out that even if his own family is safe and sound, danger can be just around the bend. Thankfully, his daddy instincts rose to the occasion in a heroic fashion.