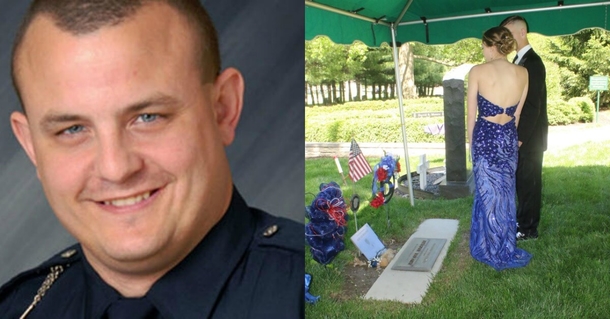 When Indianapolis teen Sierra Bradway got ready for her prom earlier this month, there was one thing she knew she wanted for her special night. Photos with her father, a fallen police officer who was killed in the line of duty.

However, when Sierra headed to the cemetery to pay her respects and take her prom pictures, she had no idea what was waiting for her.

Sierra’s father, Officer Rod Lee Bradway was killed after he responded to a domestic violence disturbance on September 20, 2013. According to Independent Journal Review, Sierra’s father was rescuing a mother and her child when he was shot six times.

That was why it was so important for Sierra to honor her father and make him a part of her prom night. It would be just her, the photographer and her date, Brock Spayd.

However, Spayd’s mother heard about the plan and wanted to do something special for Sierra. Fox News reported, “The plan was set in motion by Brock’s mother, a captain in the Marion County Sheriff’s Office, who learned of Sierra’s cemetery visit and called upon officers from the Indianapolis Police Department and other regional departments to help make the teen’s prom more special.”

The Indianapolis Police Department were able to make this moment so much more beautiful when its officers showed up at the cemetery to surprise Sierra. When she arrived at the site, there were two police officers on horseback and a dozen more lined up waiting for her.
USA Today reported that the photos were truly spectacular, “By Sierra’s side in her prom photos is IMPD Chief Bryan Roach.

She smiles, cradling a photo of her father in her hands. And in other photos, she’s surrounded by dozens of police officers and sheriff’s deputies.”
“There were a lot of laughs, some tears, but most importantly, there was love,” a video, posted by Indianapolis Police said. “Sierra, we know your father is smiling from heaven. Know that your Blue Line Family will always be here for you.”

After the past few years of ignorant police bashing, when even efforts to honor cops can run into trouble, a story like this is just what the doctor ordered.