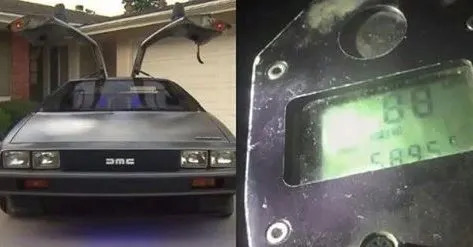 A California driver got a ticket for driving his DeLorean at 88 miles per hour — the exact speed needed to travel through time in the movie “Back to the Future.”

Spencer White of Santa Clarita was driving with his mother on the 14 Antelope Valley freeway in his DeLorean, the car that became famous for its appearance as a time machine in “Back to the Future,” when the two decided to pay homage to the film, according to WJW.

The mother and son realized that the car was at 85 miles per hour, and Spencer said his mother encouraged him to accelerate to the iconic speed.

“The police officer walks up and says ‘I pull you over for speeding. do you know how fast you are going?'” recalled Spencer. ” I said ‘did you get me on radar?’ And he said ‘yeah I did.'”

“He said ‘you’re going 88 miles per hour,'” said Spencer, according to WTMJ. “I busted up laughing and my mother was busting up laughing.”

Spencer said even the officer was amused by the incident, and “got this big grin on his face like he won the lottery.”

He even let Spencer take a picture of the radar gun that said how fast he was driving, KTLA reports.

“He goes to his car and then he comes back immediately and he’s got the radar gun,” Spencer said. “And he says yeah, ‘Do you want to take a picture of it?’ And I say yeah I do.”

“Because of the car and everything, it just was hilarious,” said Spencer, who added that he didn’t really travel through time because he didn’t have a flux capacitor with him and he was “out of plutonium.”

Spencer thought “for a second” that the officer might let him go with just a warning because of the amusing incident, but he got a ticket for $400. Spencer said that it was “the dream ticket.”

In another story of “Back to the Future” making its way into real life, an autistic 18-year-old boy’s family surprised him with a prom night themed around the movie, the Carroll County Times reports.

“I feel so good!” said Alexander White after he walked down a red carpet to find two DeLoreans on Main Street in Manchester, Maryland.

The Manchester Valley High School student is “fascinated by the possibility of time travel so the ‘Back to the Future’ movies really interest him,” said his mother, Melanie. “My face hurts from smiling at him,” she added.

“He is the nicest person,” said Melanie. “I just want him to enjoy the heck out of this evening with his peers and feel as special as he is.”