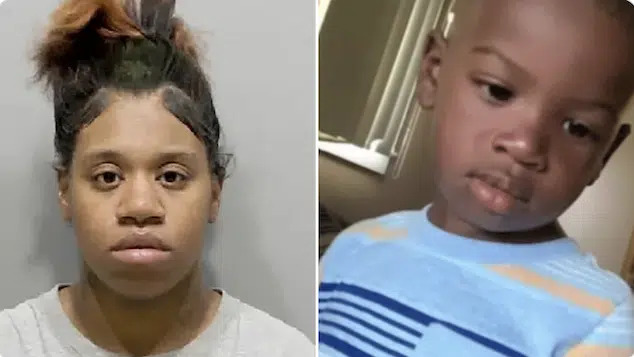 How were the children continue to be allowed to stay in the home and how did CPS miss the warning signs?

A Detroit mother has been charged with murder after the body of her 3-year-old son was found in a freezer Friday, according to the Wayne County Prosecutor’s Office.

The child’s mother, Azuradee France, 31, was also charged by Wayne County Prosecutor Kym Worthy with first-degree child abuse, torture and concealing a death, which are all felonies, officials said.

France was arraigned Sunday and pleaded not guilty in the death of her son, 3 year old boy, Chase Allen the prosecutor’s office stated according to ABC News.

The child’s body was discovered early Friday after police officers responded to the home to conduct a wellness check, Detroit Police Chief James White said at a news conference Friday. The officers found the child’s body decomposing in a freezer, White said.

The macabre discovery came despite Child Protection Services (CPS) being called to the family home ‘dozens of times,’ according to the boy’s grandmother, Toni Hayes.

According to Hayes, the mother of the suspect, the boy was blind, Fox News reported.

Hayes said the boy’s mother  ‘couldn’t deal’ with him and told of family members having asked CPS numerous times to take care of the boy – only for the agency to continually return the boy to the mother.

Family members also claimed CPS visiting the rundown house where the 3 year old lived along with five other siblings, ‘dozens of times’ in 2022 alone, only for the mother to never never allow anyone inside.

‘I called CPS on her. A lot of us called, and they’d come out and give her kids right back to her,’ Hayes told Fox News.

Investigators said they are unsure at this point how long the 3 year old boy’s body was in the freezer or when or how he may have died. The medical examiner’s office ruled the boy’s death a homicide, police said.

The case remains under investigation, and the facts and evidence will be placed on the record at the preliminary examination.

What about the other 5 children?

The cause of death was not stipulated.

‘The alleged facts in this case have astounded even the seriously jaded,’ Worthy said in a statement.

Of note, the boy’s grandmother previously indicated not seeing her grandson since March.

The five other children who lived in the house were checked at a hospital and were being placed into custody of Child Protective Services, police said. The whereabouts of the children’s father(s) remained unclear.

France remains in custody, and her next hearing is scheduled for July 8, the prosecutor’s office said.