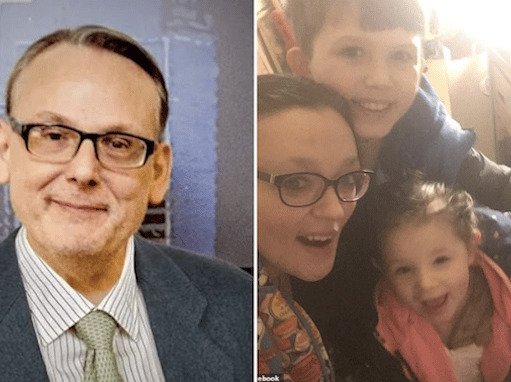 A Michigan news radio anchor was killed in an attempted murder-suicide at his family home Friday noon in an attack that left four other people seriously injured.

Jim Matthews, a 57-year-old overnight anchor at Detroit‘s WWJ-AM, was murdered Friday in Chesterfield Township according to his station.

Matthew’s 35-year-old live in girlfriend and his two children, ages 5 and 10, were hospitalized in the ‘domestic incident’ along with the 54-year-old murder suspect — described as a family friend –who had unsuccessfully attempted to kill himself, the Detroit Free Press reported.

The suspected killer was a frequent visitor to Matthews’ home and had been invited inside hours before the disturbing attack, which happened around noon, police said.

Matthew’s girlfriend, Nichole Guertin, who’d been stabbed multiple times was able to escape the house with the 5-year-old girl and flag down a driver to call police, officials said at a press conference.

She was taken to the hospital in critical condition while the girl was in stable condition with unspecified injuries, the outlet reported.

Police arrived to find Matthews dead along with the anchor’s 10-year-old son, Hunter critically injured in a closet, where he was bound and suffering from blunt-force trauma.

The suspect was in the basement suffering from self-inflicted wounds and a drug overdose. The un-named man who’d overdosed on heroin was resuscitated with Narcan, and taken into police custody. He remained in stable condition and faced a series of charges.

It remained unclear what led to the attacks, with authorities continuing to investigate.

The late broadcaster was a devoted family man who was passionate about reporting the news, his employer of seven years, WWJ-AM reported.

Noted the radio outlet: ‘He would often talk to co-workers about his children and his love for them and their adventures at school,’

‘He was a consummate professional and was dedicated to WWJ and the broadcasting industry. He loved delivering the latest news to his listeners,’

‘There have been many tears shed in our newsroom this afternoon. Our thoughts and prayers go out to Jim’s family and friends.’

Matthews’ girlfriend and two children remained hospitalized as of Saturday morning. Police have yet to reveal the identity of the attacker and the connection he has to the family. No known motive was immediately known.