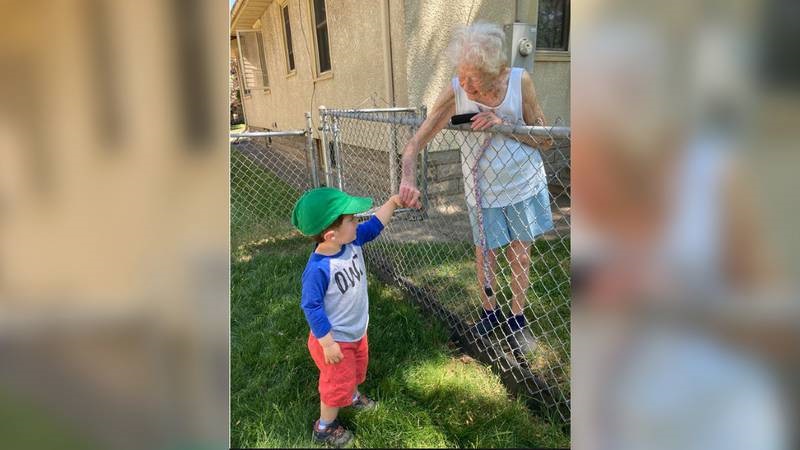 This pandemic and lockdown has given us the opportunity to spend much needed time with the ones we love and in turn, appreciate them. However, this challenging phase has been tough for those who live alone, especially seniors.

Thank goodness this has not been the case for a Minneapolis woman, who forged a beautiful neighborly bond with a young boy. 99-year-old Mary O’Neill has an adult daughter, who lives in the area and visits her at least once every week. But the rest of her relatives are scattered and no thanks to the pandemic, they haven’t been able to meet her leaving the soon-to-be Centurian in seclusion.

Thankfully, she found a little friend just next door. It’s a 2-year-old boy named Benjamin Olson. Over the years, Mary has been watching the child grow through the chain-link fence that separates their properties. She has witnessed the boy as he learned to walk, talk, and eventually as he started running and playing.

“Benjamin just turned 2 years old, we’ve been neighbors with Mary long before he was born,” said Benjamin’s mother Sarah Olson. She explained that her family hasn’t seen Mary that much but when the pandemic hit and forced them to stay home, they frequently saw her outside. And as Benjamin began playing in the yard often, the elderly lady would come outside too. Eventually, the two began interacting and playing with each other. 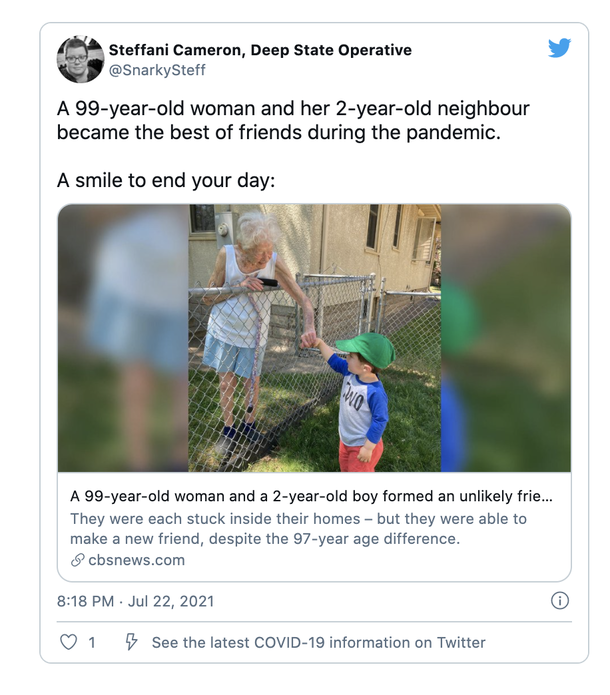 They have even developed a game that allows them to play over the fence. While Benjamin passes her a ball, she uses her cane to hit it back at him. “He would run over to Mary when he would see her in the yard and he would bring her a ball,” Sarah told CBS News. “And she created this game that we call Ping Ball, where Benjamin brings her a ball and Mary reaches her cane over our fence, flips it over and kind of kicks it to Benjamin back and forth.”

For little Benjamin, O’Neill is his dear friend who he loves meeting and playing with. The age difference doesn’t bother the kid one bit. “She’s just Mary, or in the past couple of days, he’s been calling her ‘Mimi.’ We’ll be playing inside and he’ll go, ‘Mimi? Mimi?’ and we’ll go outside and look for [her],” she added. “She’ll call out, ‘Hey Benjamin!’ when she sees him, and it’s just been so cute to watch it.”

While O’Neill is Benjamin’s first best friend, the elderly woman cherishes her bond with the boy as it really helped her stay strong during the pandemic isolation. Without anyone at home, she needed a friend and found that in baby Benjamin. “We learned how much she looked forward to seeing him playing in the yard and how Benjamin kind of kept her going in the pandemic when she wasn’t able to see anyone else,” revealed Sarah.

Playing with Benjamin has rekindled O’Neill’s childlike spirit as she could be seen having fun with bubbles and even water guns. According to the news outlet, O’Neill has one granddaughter and she is already an adult. So for her Benjamin is the closest thing she has to a grandkid or great-grandkid at the moment. It’s been over a year since the two began playing together and they still love spending time in each other’s company. When she celebrates her 100th birthday in August, the Olson family hopes to be there with her to help blow out the candles, per the Good News Network.

Their friendship has touched thousands of people and Sarah thinks it could be because their relations formed so naturally. “We didn’t have to work on it at all, it just happened really naturally,” she said. “Friendship can just happen so many different ways, I’m just really happy they were able to form this friendship – quarantine or not, pandemic or not. I’m happy they formed this friendship because it means a lot to her and it means a lot to him too.”