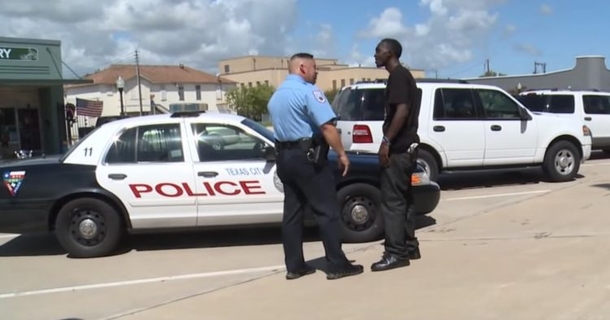 The average criminal would try to evade authorities as much as they can, not to mention they would try to stay away from any kind of situation that could lead to a run-in with law enforcement. Think about it, why would they want to get themselves into any more trouble?

However, this wasn’t the case for one convict who chose to go in the opposite direction and running toward police officers instead of running away.
Edward “Doc” Amey, grew up selling drugs in Texas, so he wasn’t always on the good side of the law. After six felonies and a handful of misdemeanors, Doc had faced multiple sentences to prison by 2015, including one arrest that involved a gun charge.

The arresting officer of the gun charge case, Salvador Chapa, had a face that Doc could never forget, and five years after his run-in with Chapa, he was reunited, but this time in a much different way.

While behind bars, something inside Doc changed and he started to turn to prayer and reconnected with his faith. By the time he was released, Doc was a different person and instead of avoiding police and disrespecting them, he ran to them with a new appreciation.

Something miraculous happened when Doc happened to see Chapa patroling the streets of Texas City, Texas. Recognizing the officer’s face right away, Doc approached him with his friend Kevin at his side. Kevin was completely confused by the situation and snapped a photo when he saw his friend joining hands with Chapa while leading a prayer.

“I turned around and saw him praying,” said Kevin, who witnessed the moment. “It was an amazing moment to witness.”
Doc shared that God has recently worked through him to pray for police officers.

The photo of Doc and Chapa was posted to social media and instantly went viral, encouraging others to join together in unthinkable ways.
Commenters felt that this story was heartwarming and several expressed their wish for more stories like this.
“If only the media puts more stories like this on a daily basis.”

“That’s why God asks us to always pray for each other even for the authorities, only God can change the heart and we have the proof right here that it work.”

“I wish this man nothing but the best in the future!”
This is certainly proof that people really do have the capability of changing, especially if their heart is in the right place.
“People like him deserves a second chance in life.”

“It doesn’t happen often but it is always great to see people overcome their past and rise above it!!!”
And the moment got others to believe…

“I may not follow any one religion, but this proves that it has a place in this world.”