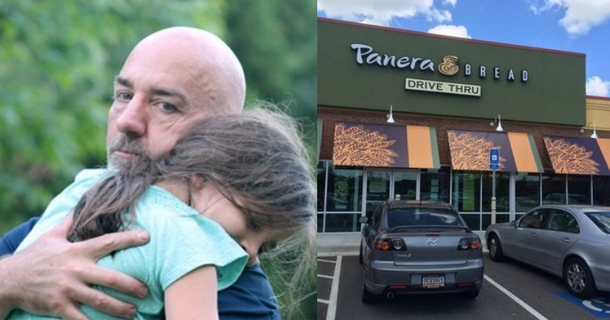 In Massachusetts, the father of a 6-year-old girl sat down to have some lunch with his daughter one afternoon, when she suddenly started to vomit profusely after seeming perfectly fine moments before. The horrified father had no clue what caused her sickening condition and rushed her to the hospital when he learned what a restaurant employee had done.

John Russo is out for blood after nearly losing his little girl to a terrifying reaction she was having. Thankfully, she was spared seconds before it was too late, but now the father has been given a sick excuse for how it happened that makes the situation all the worse.

Russo said that he used the computer to place his family’s lunch order from the Panera restaurant in the town of Natick, which made picking the food up quicker and easier. His daughter, whose name was not released, has a severe peanut allergy, which is why he ordered her a grilled cheese sandwich since it is nut free.

With added caution for her allergy, he clearly noted in two separate places on her order that this item was for a child with a peanut allergy. However, when she took a big bite into her grilled cheese, it had strangely been prepared as a peanut butter and grilled cheese sandwich, and the reason for it is disturbing.

Before she could even swallow her first bite, the child began to vomit and started breaking out in hives. Russo rushed her to the hospital where she was given a shot of epinephrine to stop the severe reaction, and she had to stay the night. The night of the incident, the upset father called the Panera Bread location and demanded answers as to how this happened. The manager blamed the near fatal mistake on a “language issue,” since the employee who prepared her food is an immigrant with very limited English and must have misread what Russo meant by a peanut allergy, Boston.com reported.

Russo isn’t buying the manager’s explanation. Even if that’s how it happened, it exposes a much bigger issue with hiring immigrants who don’t take the time to learn the language. The girl’s family has since sued Panera Bread, claiming that they “engaged in unfair and deceptive business practices by adding peanut butter to the plaintiff’s grilled cheese sandwich knowing that she has a life-threatening peanut allergy.”

The restaurant is certainly getting what they deserve since they put a 6-year-old’s life on the line by hiring an inept immigrant. This is just another reason, and perhaps the most important one, why there should be an English-only policy in the workplace, especially when the job deals with consumable products. Safety should take priority over cheap labor, and an employee should have to prove that they are proficient in reading, speaking, and following directions in English.