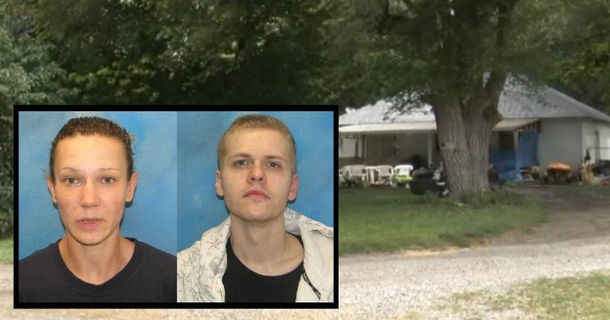 A Missouri mom noticed something she thought was new with her 3-year-old daughter when the girl began acting strangely. However, as soon as she recognized what she was doing, she looked at her boyfriend in horror, realizing it could only mean one thing, and it wasn’t the first time.

Both the woman and her boyfriend are behind bars after it was discovered what was going on in their dilapidated house of horrors in the town of St. Joseph, and it became clear that the mother wasn’t innocent in the goings on, even though she tried to say so. The toddler was rushed to the hospital with her strange side effects, and now, she will never be the same after what her parents were putting in her mouth.

According to KMOV, Jean Mangus and her boyfriend Scottie Briner, both 29, are not new to law enforcement, which has come to know them from a prior arrest and was back to pick them up again for the same reason. The degenerate pair called for an ambulance after Jean said that their daughter was “acting funny” and claimed that it just started after she had been playing outside. However, that was far from the truth since the proof was in what the physicians found inside the girl upon arrival to the emergency room.

The child’s behavior was not unlike her parents’ since the three of them were all on drugs after it was discovered that the toddler had gotten into her parent’s stash of oxycodone and methamphetamine, both of which were found in her little system. Although the child is expected to eventually recover, she may not fully heal if she’s given back to these two again, like she was the first time she found her parents drugs and overdosed on them, WDAF reported.

Briner and Mangus were both arrested and charged with child abuse or neglect after police traced the stash in their daughter’s system back to them. When investigators searched their sickening home, they were horrified to see that the family had been living in uninhabitable conditions, in a practically condemned residence. The house was described as covered in filth and had a massive bug infestation, which would have also been seen the first time around when the couple was apparently given the benefit of the doubt and their daughter back.

Although the argument often goes that parents make mistakes and shouldn’t get their children taken away after one “slip up,” this is no accident. It was the result of willful neglect that the toddler had drugs in her system and was living in a place where it’s impossible to thrive, all of which any reasonable person could see coming after the first time.

There is no reason that she should have been returned to them, and the proof of that was when she consumed drugs again. Unfortunately, it won’t be the last if she’s given back — unless the results of that “accident” are fatal.