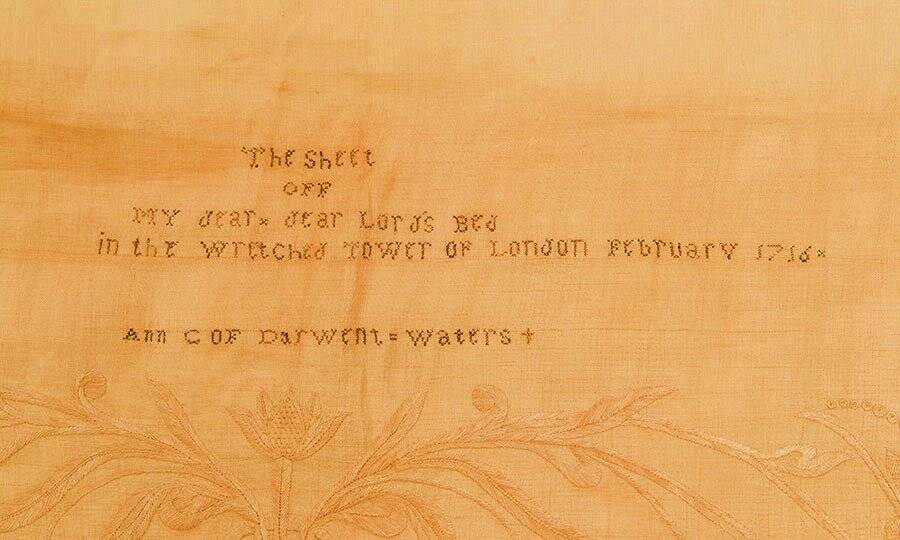 Anna Maria Radclyffe likely embroidered the message with the hair of her husband, James Radclyffe, who was executed in 1716 for rebelling against the King of England.

After her husband was executed in 1716, Anna Maria Radclyffe sat down to do some embroidery. But she used unusual tools. For cloth, she used the bedsheet from his Tower of London prison cell. And for thread, she used human hair — possibly plucked from his severed head.

“This embroidered bedsheet is an extraordinary item, which would have taken months or years to create,” explained Beverley Cook, curator of social history at the Museum of London.

“The care and devotion speaks to Anna’s personal devastation and remarkable character — determined to protect the memory of her husband long after his death.”

Anna Maria’s husband, James Radclyffe, the third Earl of Derwentwater, was executed on Feb. 24, 1716, for his involvement in the Jacobite rebellion of 1715. James and other rebels had tried — and failed — to put the son of a deposed Catholic king back on the throne.

James was sent to the Tower of London to await his beheading. Though Anna Maria often joined him there, James also sent her love letters in which he called her his “dearest worldly treasure” and urged her to be courageous and not melancholy.

“It would be lovely to think that they were lying together beneath this sheet,” said Cook, noting that the sheet didn’t look too worn and may have only been used during his four-month stay in the Tower.

“Obviously, we can’t prove that, but it’s likely that she conceived their daughter at that time.”

Following James’ execution at the age of 26, his heart was sent to an Augustinian convent. Anna Maria was given his body — with his head sewn back on.

“That would have given her the opportunity of removing some of his hair,” said Cook, noting that Anna Maria kept some of her husband’s hair in a locket. “And we do know that, obviously, taking locks of hair was quite a common thing for people to do.”

Cook also speculated that Anna Maria used both James’ hair and her own, since the hair sewn into the bedsheet looks like two distinct colors. Other decorations on the sheet include flowers, leaves, and a wreath in the shape of a heart. Unlike the love message, these additions are stitched with linen thread.

Anna Maria later fled the country with her children, settling in Brussels in the hopes of raising them Catholic. Sadly, she died in 1723 from smallpox.

But the bedsheet that Anna Maria had embroidered with human hair lived on. Generations of James’ supporters and other activists guarded it over the centuries until the Museum of London obtained it in 1934.