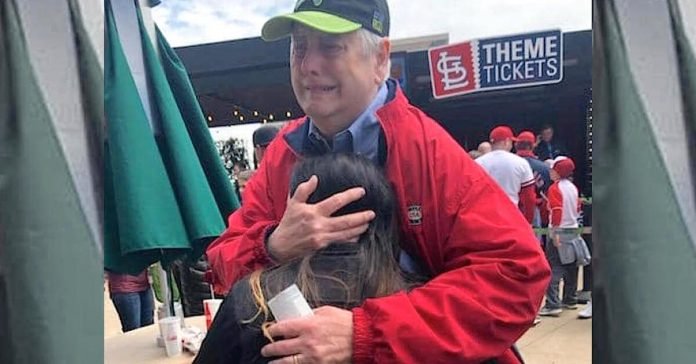 When 21-year old Donovan Bulger died after a tragic accident in 2016, his family followed his wishes to serve as a donor, allowing his organs to be harvested after death to help save numerous other lives of people waiting for transplants in various parts of the country.

Donovan’s sister Savannah reports on Facebook that the family received correspondence from the heart recipient about a year ago.

She responded by sending a few pictures of Donovan to the donor, reassuring the recipient that he now was the proud owner of a heart of gold from her brother.

There are an estimated 113,000 individuals on the national transplant waiting list as of this past January.

But about 20 individuals pass away each day still waiting for the right organ match.

Fast forward to this April when Savannah and her family went to Busch Stadium in St. Louis to attend a baseball game in observance of Transplant Awareness Day.

Every member of Donovan’s family proudly wore a bright green t-shirt, imprinted with the words organ donor, hero and brother beneath Donovan’s picture.

Suddenly a woman approached the family while they were gathering to take a group photo, asking if they were related to Donovan.

She had seen Donovan’s photo on each of their shirts.

Savannah thought the woman probably recognized her brother as someone who went to the same school as she did or was a fellow employee.

But what unfolded next was almost unbelievable.

Savannah and her family were introduced to the man, standing right next to her, who had received her brother Donovan’s heart and save his life.

Donovan’s sister and his heart recipient then embraced in a very emotional hug.