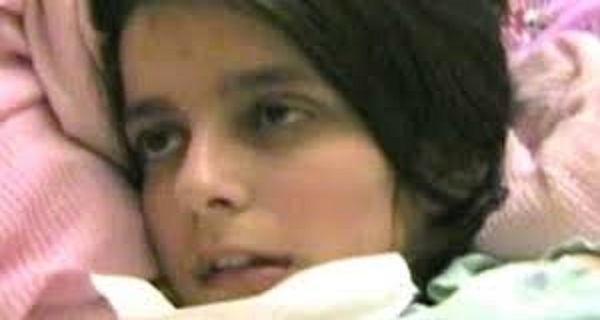 After 11-year-old girl was considered “brain dead” for 4 years, she randomly wakes up. However, no one expected these to be her first words and it didn’t stop there.

Victoria Arlen, who was born with her brothers as triplets was a very happy and hopeful kid who enjoyed dancing and very gifted at sports. All of this took a dramatic turn when she was 11-years-old. As she began feeling flu symptoms and started passing out multiple times, her health got worse and unfortunately her family could not help her.

Extreme inflammation of her brain and spinal cord was ruining her life and as a result of her condition, she became paralyzed from the waist down. Over time she completely lost the ability to speak. Then she slips into a coma, however her inspiring stories did not end here. What happened four years later shocked not only her family but physicians, too.

Victoria was kept alive with a feeding tube. Although her parents were told that it was unlikely she would recover, Victoria could hear her loved ones. When Victoria first “woke up” mentally, she was unable to move her body. She could hear conversations around her and wanted to react, but her body would not obey her commands. Victoria had no way of telling people what was happening to her.

She was “locked” inside her own body, where she would remain a prisoner for years. As if someone had flipped a switch, she could not control her body, but she was there, listening. Unable to respond, she heard doctors tell her family that she was effectively brain dead and would be a vegetable for the rest of her life. They were wrong, and shockingly, no one can tell you that better than Victoria herself.

“But my parents believed in me. They set up a hospital room in our house in New Hampshire and took care of me. My three brothers — I’m a triplet and we have an older brother — talked to me and kept me in the know about what was going on outside of my room. They empowered me to fight and get stronger. They didn’t know I could hear them, but I could,” Victoria said, according to ESPN.

Nearly four years after slipping into a coma, Victoria was completely out of her vegetative state. Her remarkable recovery began after she was finally able to make eye contact with her mother and blink on command. Then, she was able to move a finger, which progressed to waving her hand, as she slowly regained control of her body. She even began eating. Eventually, she began to talk again, first forming single words, then full sentences.

Despite her incredible recovery, there was still one thing she couldn’t do. Victoria was told that the swelling to her brain and spinal cord had caused permanent damage, paralyzing her from the waist down forever. She couldn’t move her legs, and specialists continuously told her to get used to being in a wheelchair.

Once again, Victoria proved she had the willpower few others could even imagine as she fought to overcome impossible odds, but it wasn’t easy. She faced struggles and even bullying as she returned to school. Just like before, however, Victoria found the turning point she needed.

No stranger to water, Victoria had grown up near a lake, learning to swim at an early age. She had even been part of a swim team, taking part in competitions prior to her coma. However, without the use of her legs, Victoria feared she would never swim again. Thank goodness, her brothers thought differently and threw her into the family pool.

Although she was initially terrified, it was just what she needed. To her delight and surprise, she was a strong swimmer — and she was freed from her chair when in the water. With that freedom, she found the confidence she’d been missing and went on to become part of the U.S. team competing in the 2012 Paralympic Olympic Games, where she took home three silver medals and one gold in the 100-meter freestyle, in which she even set a new world record. Her achievement thrust Victoria into the spotlight. She was invited to speak as a lecturer and began to tell her story to reporters, captivating audiences.

Still, she was bothered by her wheelchair. So, she and her mother temporarily moved to San Diego so Victoria could participate in the Project Walk program, which helps paralyzed people regain the ability to use their legs. But, of course, Victoria missed home.

“We realized this was the place that could help me, but we didn’t want to live hundreds of miles away from my brothers and dad,” Victoria explained before revealing that her “family decided to open the first Project Walk franchise on the East Coast.” She furthered, “This way, I could train every day and achieve my goal, while others in my hometown could regain the hope they needed.”Even though specialists remained skeptical and one doctor even told her parents that he wouldn’t “mortgage his house” to bet that Victoria would ever be able to walk again, that’s exactly what they did in order to afford to open a Project Walk Boston. Then, held in a harness above a treadmill with two coaches helping her move her legs, Victoria took her first small steps six years after she first “woke up.”

It was no easy feat, but she didn’t stop there. She got up and trained for hours every single day to reach her goal. Because of her determination, she was eventually able to walk with crutches, later ditching the assistive devices and walking independently. “Walking is still challenging and I still have significant impairment,” she explained. “But my struggle is now less visible.”

“But it’s all worth it,” she said of the effort it takes for her to continue progressing. “It’s been 10 years since I was able to look someone in the eye instead of staring at everyone’s butts all day,” she added, referring to the unfortunate position she finds herself in when seated in a wheelchair.

Saying she was unsure how people would react to her when she first stood up from her wheelchair, she explained, “But then I realized this is my journey and nobody else’s and maybe it can give hope to people who need it most.” Today, Victoria is not only a Paralympic gold medalist, she’s also a program leader for the ESPN sports channel and, more importantly, a survivor.

After her turbulent 10-year journey, Victoria Arlen is literally a walking, talking miracle and an incredible inspiration. However, she makes sure to point out, “I didn’t do this on my own, and I am grateful for everyone who has helped me to this point. Each day, I become more comfortable with my new reality.” Explaining that she thought taking her first steps would be her finish line, she added, “But really, they were only the beginning.”