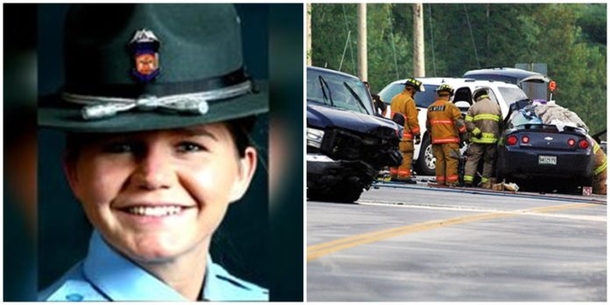 Georgia State Trooper Lindsay Barber woke up to go to work on what she would think would be a typical Monday morning, but she didn’t realized that she would be would be dealing with a scary situation on this day.

She recieved a call about a car chase close to Coweta County were ready to join in and provide assistance. Then something was announced that stopped everyone: innocent women and children were involved too.

Mario Anderson, age 31, was speeding 120 miles per hour and had no plans on slowing down anytime soon. Officers had a hard decision on their hands because three children and a woman were involved. That’s when everyone’s fear became a reality.

At one point, officials said, Anderson got off at Exit 41 toward Newnan and re-entered the interstate headed in the opposite direction. The situation continued to get worse, as now he was driving into head on traffic trying to avoid police. Anderson then lost control of his vehicle in a construction zone, slammed into a barrier and then collided with another vehicle.

Barber then rushed into action, putting her body on the line in order to protect and serve anyone that needed her assistance. She began extinguishing the flames with her fire extinguisher and trying to find a way to reach the victims in the car. She set her emotions aside and acted as a human being who had a strong desire to save everyone that needed her help.

“I think she did the job she was trained to do and she did a very good job,” said Sgt. Katie Thompson. “She’s not quite a rookie anymore, but she’s gotten out of school in the last year. When I arrived on the scene, she (Barber) actually had used all of her fire extinguishers and we had to use mine to make sure the fire was completely out,” said Thompson.

Anderson has been charged with a list of offenses, including DUI, reckless driving, and child endangerment.

We are very glad to hear that everyone made it out of the car accident alive, and hope that they have a quick and healthy recovery. If it weren’t for the quick actions and thinking of this fearless and courageous officer, then many lives could have been lost. We thank her for her service!