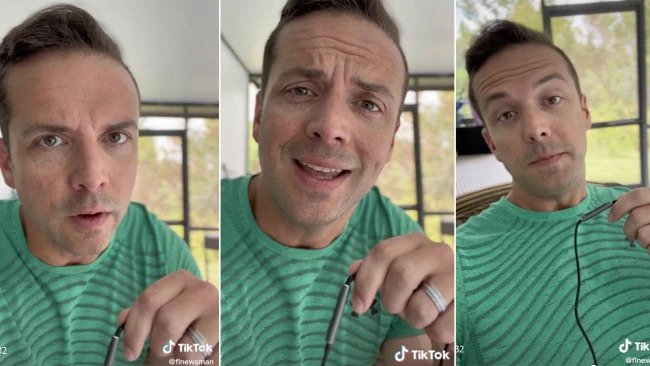 Matt Austin is the proud dad of two teenage girls, and when he posted a photo on Facebook of them dressed for their formal, he didn’t expect anything but nice comments.

But instead of compliments about the daughters he loves so much, Matt got hate and criticism from the so-called fashion police, claiming his girls’ dresses were inappropriate.

The US dad, who is also a news anchor, was furious. He posted a video on TikTok epically taking down his daughters’ haters.

“One thing that has always pissed me off about being a father of girls is when people say things like, ‘These girls need to dress so they don’t distract the boys’. Or even worse, they’re dressing in a way in which ‘they’re asking for it’,” the furious dad said.

“Let’s get something crystal clear. It’s not my daughter’s job to make sure your son is focused in school.

“Also not her job to dress hideous enough so that your son doesn’t assault her. It’s your job to not raise a pervert with no self-control.”

“I wouldn’t let them go anywhere dressed like that,” one person said.

“They should have respect for themselves,” said another.

“So sad parents think it’s OK to send young women out with everything showing,” a third person commented.

While Matt said people had no business making comments about his children, he did agree that the outfits weren’t his favourite either.

“Let’s be clear, those outfits are not ones I would choose for my daughters to leave the house in,” he said.

“But if I start dictating what my daughters wear I’m going to teach them three things: They’ll start to hate me for arbitrary rules; they’ll start to lie to me; they’ll think that it’s OK for a man to tell them what to wear because they look ‘too good’ and that ain’t happening.”