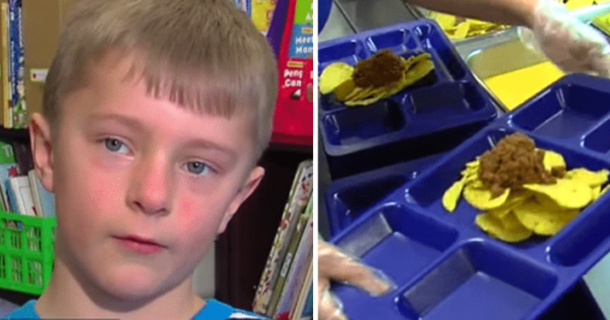 Often when you meet someone who “wants to change the world,” they talk about their dreams of going to a “third-world country” as part of a volunteer program to help those in need.
While that is a beautiful thing, there are millions of people in need right at home in the United States. Although many people have enough food to eat and drink to excess, some people have nothing to put into their bellies.
The economic divide between rich and poor continues to grow each year as the middle class, and working class are straddled with more debt and disadvantage, while their wealthier counterparts continue to amass untold amounts of money.

One eight-year-old boy named Cayden Taipalus from Howell, Michigan wanted to change the world. But instead of looking beyond his life, he saw an opportunity to help someone, and he took it. The little boy, who has a heart of gold, watched as the elementary school denied his friend a hot lunch.

Cayden could not believe that the Challenger Elementary School refused to serve his friend a hot lunch because his account was short. Instead, they gave him a cold cheese sandwich and told him to go. Cayden refused to let this be his friend’s fate, so he stepped in and did something that left the lunch workers in shock. 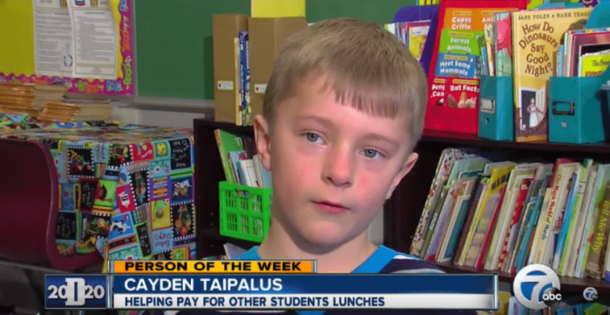 His mother, Amber Melke-Peters, came forward to tell others about her son’s generosity and compassion. She believes his good deed needed to be highlighted. Because he had watched his friend get denied food from the school, Cayden approached Amber and asked her how he could help. He wanted to make sure children like his friend never had to miss a meal simply because they didn’t have money to afford it.

After a long night of brainstorming, Cayden and Amber decided to work together to create a web page that might change the world, a little at a time. It is called Pay It Forward: No Kid Goes Hungry. And as the name suggests, Cayden is on a mission to change the lives of American children for the better starting with those he knows personally. 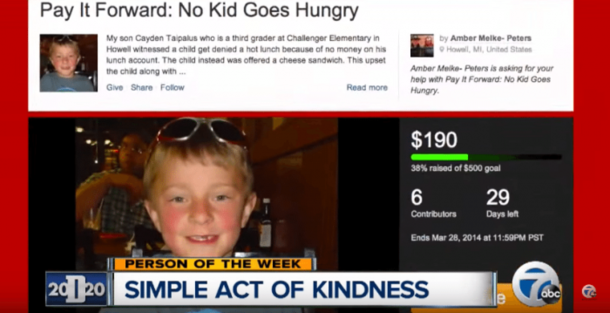 The website helped raise money to pay off the debt of Challenger Elementary students lunch debts.

Cayden didn’t just want other people to donate to his charity. He also did the work himself. He wandered the town, collecting recyclables so he could trade them in for cash, which went directly to pay for lunches for hungry Michigan kids.

“I am so very proud of my son,” Amber said. “He is only eight-years-old and to grasp the concept around this is just amazing in my eyes. He has a heart of gold.” 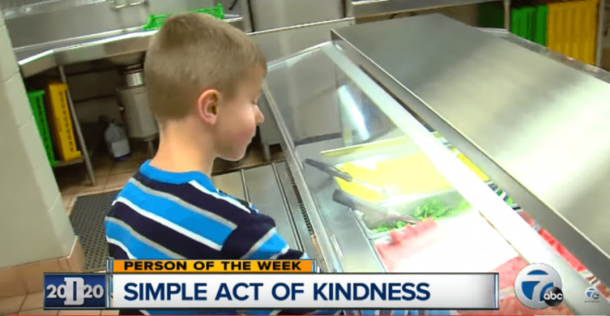 Amber is not the only person amazed. His classmates and the administration at Challenger Elementary are also stunned. They didn’t know they had a hero in their midst.

Cayden wanted to raise enough money to ensure his classmates did not go hungry at school. In the end, he raised nearly $7,000, which purchased hot lunches for three hundred students. He plans to keep fighting to change his world for the better.