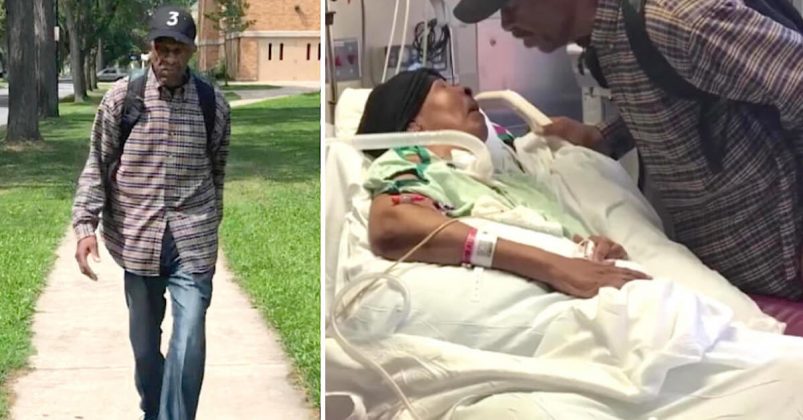 Every single day, under the stifling heat, this 99-year-old man walks for 6 miles without fail – all for love.

Luther Younger and his wife Waverlee met back in the 1960s at a laundromat.

They were married in 1963, and Waverlee raised Luther’s children from a prior relationship as her own.

The couple also has a daughter together, and they live in Rochester in New York.

Nine years ago, Waverlee received terrifying news – she had a brain tumor, and doctors said she only had five years to live.

But now, in 2018, she has defied these expectations and strongly survived through it all.

Still, she has faced a lot of adversity on her road through treatment.

She is paralyzed and often winds up in the hospital, sometimes for months on end.

And who should be there by her side every single day as she undergoes treatment but her incredible husband?

Waverlee was in the hospital this summer due to pneumonia, and Luther ignored the 90-degree temperatures and walked three miles to the Strong Memorial Hospital to see her every single day, and then three miles home later.

Absolutely nothing has broken his routine, even the heavy rain.

Although many people recognize him as he walks, he turns down offers for a ride, saying he likes walking as it helps him to clear his mind.

Luther, who is a veteran of the Korean War, doesn’t just walk.

He also breaks into runs and even pauses to do push-ups sometimes.

Sometimes, people tell him that he should act more “his age”, but he doesn’t smoke or drink and feels great health-wise, and he thinks ignorant comments he receives are likely due to jealousy.

Surprisingly, there have really been hateful and harassing comments again this loving family, but Luther brushes them all off.

To him, nothing matters but his wife.

After 55 years together, Luther loves his wife just as much as he did when they first met, and it shows.

According to him, he is absolutely nothing without her, saying he never would have made it without her, and he even states that she is the sweetest cup of tea he ever did have.

It’s very difficult for him to see his lovely wife in her current state, and he says it’s been tough – both for her and for him.

According to Lutheta, the daughter of Luther and Waverlee, her mother will eventually be released and will be able to come home.

The plan is for her to live the rest of her life at home. Lutheta has also started a GoFundMe page to help cover Waverlee’s mounting medical bills, and you can donate to the page here.

When his wife is very sick, Luther refuses to leave her side.

Sometimes, he will even sleep on the floor beside her bed – that’s how devoted he is to her.

Luther and Waverlee are proof that long-lasting, true love does exist, and they will restore your faith in romance!