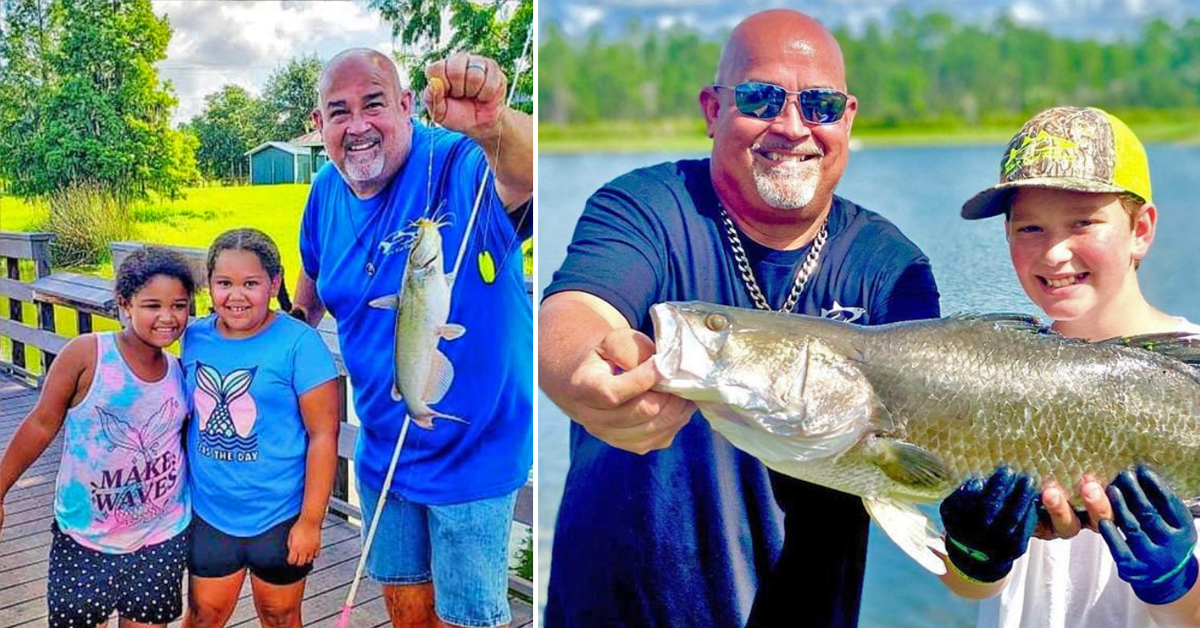 William Dunn of Lakeland, Florida, couldn’t help but notice his eight-year-old neighbor storming in and out of his own house across the street.

The boy did that often enough that Dunn became concerned.

“I wondered what was going on in his life, so one day, I decided to ask him,” he said.

“He told me that he didn’t have a father, and I realized there might be something I could do for him.”

Dunn, 57, grew up fishing with his dad and had assisted him for a time with his lobster business in the Florida Keys. He said that fishing has always brought him peace and taught him patience.

“When you’re on the water, you can forget about your problems and just appreciate the moment,” he said.

Dunn, a father of three, reached out to his young neighbor’s mom and asked permission to take the boy fishing.

One Saturday afternoon on the water soon led to another, and soon enough, Dunn found himself teaching the boys’ friends and other school kids how to hold a fishing pole, rig a line, and reel in a catch.

Since then, Dunn has taken groups of kids on weekend fishing trips. Most of them didn’t have father figures and had never fished before. Some were foster kids who had moved from one home to the next for years.

“They’d been through a lot and they’d seen a lot, and their lives were difficult,” Dunn said. “But when they were fishing, all of that faded away.”

Dunn said that these kids would laugh and make new friends when they were out on the boat. That’s when he knew he was on to something.

Initially, Dunn took a good chunk of his salary from his job selling tires to fund the weekly fishing expeditions on charter boats. Then, in 2018, he started the nonprofit Take a Kid Fishing Inc. in Lakeland, a city with dozens of lakes.

In the last three and a half years, Dunn and a few volunteers have introduced over 2,500 children—most without fathers around—to spending peaceful time on the water and the excitement of capturing a fish.

Dunn, known to the kids as “Big Will,” said he always felt lucky to have a father to take him fishing when he was growing up in Miami.

“I’m the youngest of six and I always had a great relationship with my dad,” he recalled.

“He lives in Tennessee now, but I still carry the lessons he taught me. He told me that fishing isn’t about what you catch — it’s about the memories you make.”

“That’s what I hope to pass along to every kid I introduce to fishing,” he added.

Dunn’s dedication to mentoring these young anglers has earned the praise of his community.

“Kids can sense that he’s genuine,” said Tom Pichette, 59, a former youth pastor who has accompanied him on many fishing trips as a volunteer.

“They’ve been dealt some hard cards and they climb aboard with some tough stories. But Will always accepts them as they are.”

Terry Pryor, 32, a mom of three, said that all her children struggled emotionally when their dad, Richard Pryor, died in a car accident in January 2020.

She was especially worried about his son, Jayden, who was 10 then. He was really close to his dad and felt like he needed to be the man of the house immediately.

“He was trying to be strong for everyone and didn’t show his emotion,” Pryor said. “I was wondering what to do to help him, and then I learned about Take a Kid Fishing.”

Jayden, now 12, has become a dedicated fisherman, thanks to his weekend outings with Dunn.

“Will has helped me to grow by taking me fishing,” he said. “I hope he knows I mean it when I say, ‘Thank you.’”

Every kid in the program gets their own fishing poles and tackle boxes. But more than that, it’s the relationships they build and the healing that happens on the water that is the true highlight of the experience.

“There’s nothing like feeling that first tug on the line and seeing a kid light up with a smile,” Dunn said. “I feel lucky to witness that every weekend.”

And these kids are equally lucky to be mentored by such a good man. Thanks, Will Dunn, for changing the lives of these children—one fishing expedition at a time.