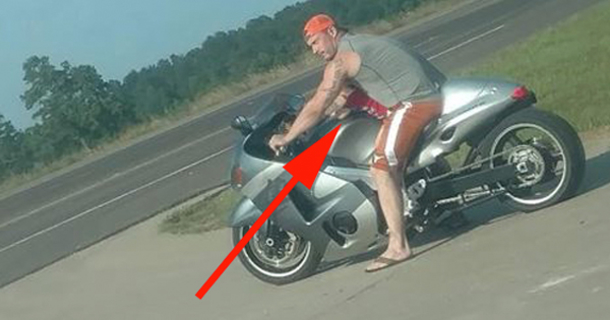 A biker in Texas may face child endangerment charges after he was caught on camera riding a motorcycle with an infant.
According to CNN, although Anthony Welsh was recently arrested by Deer Park Police for open traffic warrants, people on social media want him to face charges over a photo that seems to show the man riding his motorbike with a baby on top.

“That’s dangerous,” said the anonymous man who took the photo.

The man explained that he and his wife were at a gas station when they saw the man with the baby and immediately confronted him.
Although the man on the bike, who was later identified as Welsh, quickly sped off, the anonymous witness was able to snap a photo of him first.

“I’m not looking to get the guy thrown in jail but he needs to get the hint the child’s life is in danger,” the concerned witness said.
It is currently illegal for a child under the age of 5 to be a passenger on a motorbike, so Welsh may face charges no matter what.
After the shocking incident went viral on social media, the Liberty County Sheriff’s Office shared the following press release:

Social media and the ever presence of cell phone cameras within our everyday society has, once again, captured a very disturbing photo that swept the social media scene like a wild fire.

A photo of a man riding what is commonly called a “crotch rocket” motorcycle with an infant child sitting in front of him and laying over the gas tank of the motorcycle was taken by a witness on Sunday and calls to the Liberty County Sheriff’s Office have been non-stop with both irate citizens wanting to know if this person has been identified as well as many citizens who saw on Facebook the photo of the bike rider and called in his identity and what was thought to be his address.

Surprisingly, no person called the sheriff’s dispatcher to report this sighting, but Facebook covered it quite well, which prompted so many calls from both the news media and the general public as well.

Liberty County Corporal James Hobson began working on the case when enough information had been telephoned in to identify the motorcycle rider and his possible whereabouts.

At approximately 4:30 p.m. this evening, Hobson arrested Anthony Braddick Welsh, DOB 12/12/86, at his residence on CR 2224 on an outstanding traffic warrant out of the Deer Park Police Department.

Hobson is presently contacting possible witnesses to this motorcycle event and developing information that could possibly lead to a more serious charge later.

Under Texas law, no child under five 5-years-old shall be a passenger on a motorcycle, and any passenger that does ride as a second person on the motorcycle must be seated in a secured seat to the back of the motorcycle with secure hand grips and two foot pegs.
Anthony Welsh has been turned over to the Deer Park Police Department on the outstanding traffic warrant, and Hobson is continuing his investigation for possible future charges here in Liberty County.