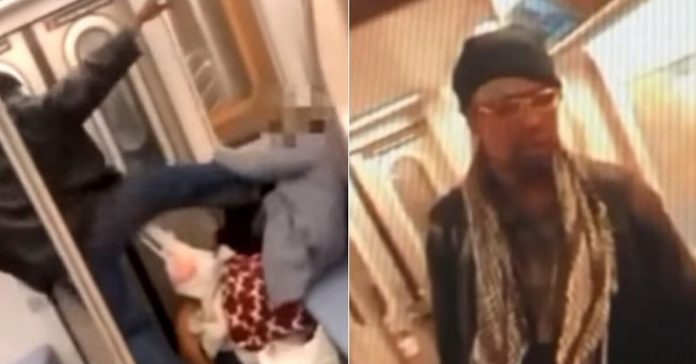 Lately, it seems as if we’ve been witnessing the very worst of humanity.

The viral video is prized more than your fellow human’s wellbeing.

For example, an elderly woman was recently brutally beaten in New York City in the view of several onlookers.

Bystanders either filmed the incident with their phones or did nothing at all.

The incident occurred on the No. 2 train in the early morning.

The elderly lady was sitting alone without bothering any of the other passengers.

The cause of such horrific violence is unknown.

She became terribly injured after the man delivered a series of kicks to her body.

Thankfully, the individual responsible for the brutal attack, Marc Gomez, was arrested.

In the video that has now gone viral, you can see Gomez kicking the older woman while hanging from the overhead railing inside the train car.

In the video, you can see her flinching from the intense pain she received from each kick. Marc Gomez is thought to be in his 40s.

The attack came both without warning or provocation.

The woman was unable to properly defend herself as the man kicked and beat her.

He even continued to verbally accost her after he finished kicking her.

He even made reference to the bystanders doing nothing.

He made them aware that he knew he was going to go viral after the encounter was filmed.

What’s particularly worrying is that none of the bystanders did anything to help the woman as the attack happened.

We should stand up for one another even in the face of light violence.

A brutal violent encounter like this should never happen in the first place, and if it does, people should be there to help.

This applies especially to those that cannot defend themselves, such as this elderly woman.

Sometimes we forget that this could happen to us or one of our loved ones. Unexpected brutality like this can never be predicted.

The video showed society at its worst.

No one was even heard attempting to verbally tell the man off.

Marc remorselessly exited the train without a care in the world.

Help finally arrived for the woman when the train reached its last destination.

It should never have taken this long for help to happen.

She was finally able to receive the medical attention she needed after such a vicious attack.