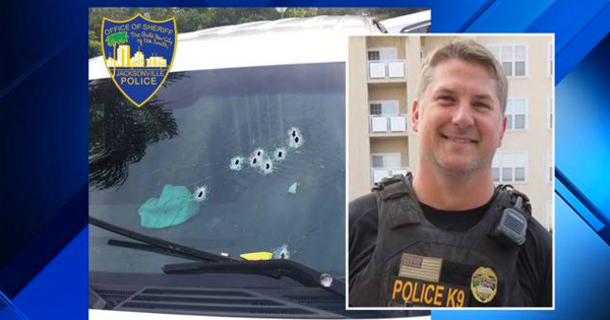 A heroic cop was part of a high speed chase of a Florida man, who shockingly leaned out of his car window in order to shoot the officer in the face through his windshield. But, this coward didn’t realize that he was about to face instant karma and a piece of swift justice from this police officer, who was not ready to die without a fight.

Jacksonville County Sheriff’s Department Officer Jeremy Mason got a tip on Tuesday, July 25, 2017, concerning an armed bank robbery situation. The robber in question pointed a weapon to a bank teller while demanding money, claiming to be “doing it for his family.” The teller did what the robber demanded and cops were alerted.

Mason rushed to the scene, and when he confronted 28-year-old Michael Harris, the suspect, he jumped into a car with a woman and led police on a high-speed chase. According to Blue Lives Matter, during the two-mile chase, Harris was leaning out of both sides of the car window and shooting at the police. During this time, he shot Officer Mason in the face.

“The suspect, based on witness information, was leaning out back windows either side, back and forth and firing at the officers in pursuit. The officers fired back a couple of times,” [Sheriff Mike] Williams said. “It appears at this time that Officer Mason was shot during the pursuit. However, he continued to pursue the vehicle to its termination point.” [Source: The Florida Times-Union]

The pursuit ended when a car crashed into Harris’ vehicle after he ran a stop sign, causing the car to spin out of control.

He got out of his wrecked vehicle and began firing at Officer Mason again. Another cop, Det. Brad Hurst, was patrolling down the street when he heard a call on his police radio regarding the chase. Harris got out with a gun in hand as the two officers stopped. He was told to drop his gun by Mason, but Harris failed to comply, shooting again. Harris was then shot dead by Officer Mason and Det. Brad Hurst after they fired back twice.

“He is stable, but he has a long road back,” Williams said of Mason. “… You have an officer who is shot during the pursuit. He continues that pursuit and puts himself between the suspect, who is an incredibly violent felon, and the community and ultimately winds up stopping him from endangering the entire community.” [Source: The Florida Times-Union]