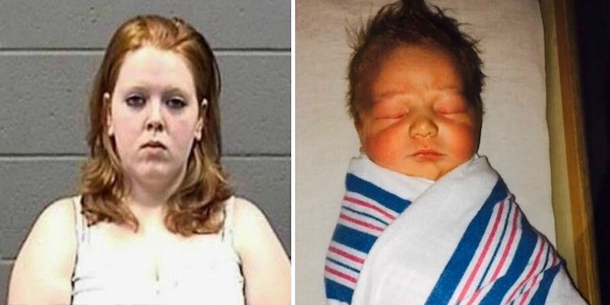 A shocking story emerged out of Connecticut, where a mother brought her 1-month-old infant to the hospital to be checked over after she noticed his leg was swollen. After examining the baby further, it didn’t take long for doctors to discover the cause of the child’s injury — and they were left with no choice but to call the police.

Kali Sastrum brought her infant to St. Mary’s Hospital after she found her son had a swollen right leg on July 2. As expected, doctors performed an x-ray to further examine the child’s leg and were immediately concerned with what they learned.

In fact, they knew that this innocent 1-month-old baby had suffered in his short life given the number of injuries they saw.

The medical staff contacted the police, and officers promptly arrested Sastrum and the baby’s father, who has since been identified as Nikolas Radaskie, after the x-rays revealed that the infant had a broken femur and that he had already “suffered 20 broken bones and injuries to his mouth and eye,” according to NBC New York.

According to Police, Sastrum stated that she was “shocked” to find out the baby had suffered the numerous injuries, and she further claimed that she “had no idea” how they could have happened. However, when the parents were later asked to make a statement, they declined, admitting that their attorney advised against it.

Eventually, doctors at St. Mary’s Hospital transferred the child to Connecticut Children’s Medical Center in Hartford, where doctors there discovered more unsettling news. Unfortunately, they had found “more than a dozen rib fractures ‘in different stages of healing,’ along with a torn frenulum in the baby’s mouth and a broken blood vessel in his eye.” According to NBC New York, “A doctor at Connecticut Children’s told police the baby’s injuries were the result of ‘inflicted trauma’ and could not have been accidental.”

This poor boy had suffered more injuries in one month than most people do in an entire lifetime. There’s no excuse for what he’s gone through at such a young age. No one deserves to be treated that way, especially during their first month of life.