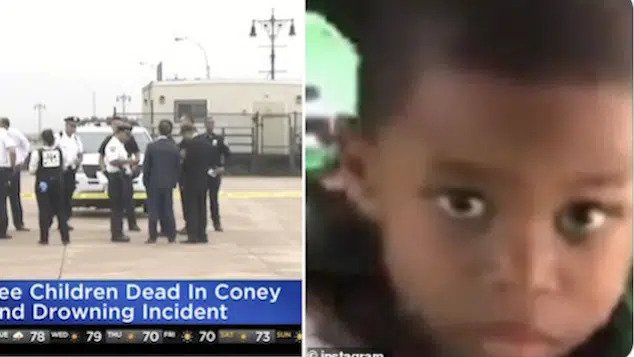 A Brooklyn woman is being interviewed in a criminal investigation after her three young children were found drowned along a Coney Island beach.

Police were called to an apartment on Neptune Avenue, Brooklyn, at 1.40am, Monday morning after a call from a concerned family member at a different location, FOX5NY reported.

They reported that they believed Erin Merdy, 30, may have harmed her three children, and officers attended but could not find the family.

At 3.15am they recieved a second call of a woman in ‘distress’ walking around barefoot on the boardwalk of Brighton Beach, Brooklyn.

Merdy claimed that her three children were missing, before they were found unresponsive on the beach two miles away.

Zachary Merdy, 7, Liliana Merdy, 4 and and a three-month-old baby were rushed to hospital but pronounced dead on arrival.

Merdy was initially taken to the police precinct, but has since been driven to hospital in an ambulance with a sheet covering her head, CBSNY reported.

Around eight officers are currently outside of her apartment, awaiting a warrant, with the investigation now an active crime scene.

Joseph, 60, a maintenance worker in the building where Merdy lives, told the dailymail:

‘I saw the young lady this morning, and she was crying for whatever happened.

‘I told her to be strong and get past the pain. She was walking around the first floor shortly after dawn.

‘I’m speechless to go and drown your children I wonder what was on her mind and what led up to that.

Section of beach where police found three children. Ages 7. 4. And three months. All pronounced dead at Coney Island hospital. 30 year old Mother suspected of drowning them but not yet charged @1010WINS pic.twitter.com/Wa0zUHyaHy

Mother refuses to communicate with police

‘People love their children, was she overwhelmed by the responsibility? It’s just a sad situation.’

In a press conference a spokesman for the NYPD confirmed officers searched the area for 90 minutes looking for the children and their mother.

Police attended the apartment, which was unlocked, with the father of one of the children reportedly telling officers he was concerned for their safety, after their mother made several statements saying she would harm them.

Officers found the mother with additional family members at around 3am. The mother was observed to be ‘soaking wet’.

They are unable to confirm if she was wet due to the rain or being submerged in the waters.

The mother is currently not communicating with officers who are attempting to interview her.

No known prior abuse and no known motive

Police are appealing for witnesses or anyone with information to come forwards.

They added that there were no known prior instances of abuse or neglect against the children.

Marine and air emergency services were called in to canvass the shoreline for the three children.

Officers attempted to perform CPR on the three children before they were rushed to hospital before being pronounced dead.

To date it remained unclear what charges to book the mother.