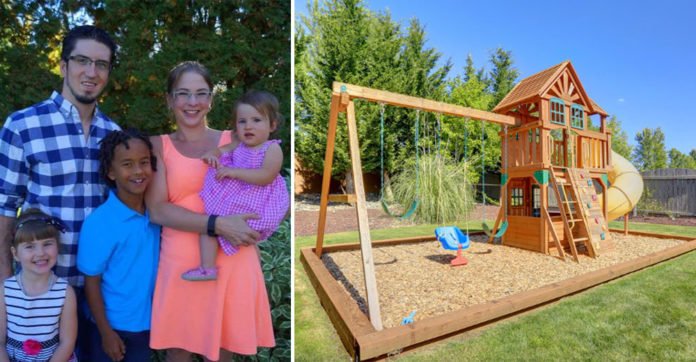 I remember growing up and playing outside with my younger brother. We had a swing set and a fenced backyard. Once our ‘chores’ were done, we were both outside playing in the yard. Would you believe that a mom from Manitoba is in trouble with Child Services for letting her children ages ten, five, and two play outside unsupervised?!

The children were outside (in the fenced in backyard) while mom, Jacqui Kendrick, was inside. CTV News reported that a complaint had been issued to Children and Family Services (CFS) and an investigation was launched.

Kendrick had thought that the CFS worker was satisfied that the children were safe, but the incident has now been recorded and is on Kendrick’s record! The backyard the children play in is enclosed on one side with chain link, and the other three sides are wood, Jacqui can see the entire yard from her living room window.

So, it is not as if the children are being left outside for hours and hours with no supervision. They simply go out and play without Jacqui hovering over them every single minute. Kendrick is concerned that if she gets ‘caught’ letting her children play outside that they could be taken away!

Why didn’t the person who filed the complaint say something to Kendrick first? Why call the authorities? I think that if the CFS employee deemed the situation safe, the matter should be dropped.

What kind of a world do we live in where children can’t play in their own back yard without an adult standing guard?!