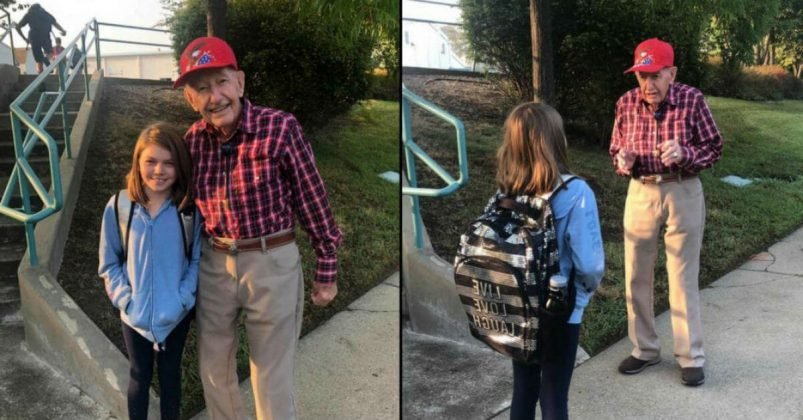 There are people out there who have decided, in their spare time, to fill the world with kindness.

It is people like these that can be considered ordinary, everyday heroes who strive to make their surroundings a little better.

In fact, for many retirees, doing such good work is the highlight of their day.

In turn, it becomes the highlight of many other people’s day as well, leaving a positive impact that may influence them for the rest of their lives.

In the case of Gina, a little girl starting middle school, the highlight of her day was meeting a 94-year-old man named Wally.

Described to her mother, Audrey, as a “cute, little old man”, Wally was a familiar figure to many of the school-going children.

This was because he has spent years standing on a corner near a school, where he would fistbump the middle schoolers heading to class and give them positive encouragement. This, incidentally, was how Audrey learned about Wally through her daughter, Gina.

Normally, Audrey would have dropped Gina off at a corner in the morning, so that the girl can walk the rest of the day to school.

However, Audrey had a little more time that one morning and had instead dropped Gina off at the parent drop off point.

It was when Audrey was pulling into the school that Gina told her mother about how she preferred to be dropped off at the corner.

She explained that it was because of how she looked forward to meeting Wally and described the daily meeting as “the best part of the day”.

Curious about this stranger, Audrey decided to take a look and see this old man for herself. There, Audrey found Wally, an old man who was well-known by the middle schoolers to have been a source of kindness and encouragement.

For years he has brought smiles to children’s faces, greeting them with fist bumps and sharing with them words of kindness and advice as they walk in.

It was abundantly clear to Audrey that he had the respect of the children, due to his ability to connect and understand them.

For many of these children, Wally was a kind, sympathetic adult who would not only listen and connect with them emotionally but was also able to give them good advice and dispense wisdom.

Upon seeing how the children were truly listening and taking Wally’s words to heart, Audrey’s spirits were lifted.

It was incredibly encouraging for her to see young children such as her own daughter find a wizened, listening ear in this kind-hearted old man.

As Wally was a loving adult figure for many of these middle schoolers, it was also very likely that they would heed his words of wisdom.

This was a fact that cheered Audrey, as she hopes such shared wisdom will help shape the children into becoming better humans.

It is incredibly heartwarming to see kindhearted people becoming legends in this way as they make the world a much better place!