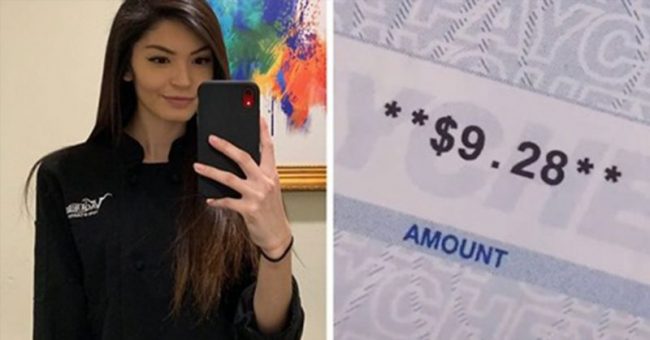 Mom Shares A TikTok Her $9.28 Paycheck After Working For 70 Hours As A Waitress

After working for 70 hours as a bartender, one mom from Texas shared her paycheck to address an important issue. Our hectic lifestyles have made us all more self-centered and selfish than before.

However, we should remember to never take things for granted, live life with empathy, compassion, and understanding, as it is the only way to make the world a better home for us all.

While on your short lunch break, while enjoying your family time in the local restaurant, when out with friends, or whenever you get your coffee-to-go, use the time to think about the people who work there.

It turns out, tipping is much more than just an act of good manners towards service providers. It can be of great help.

According to the Federal Fair Labor Standards Act:

“The United States of America federal government requires a wage of at least $2.13 per hour be paid to employees who receive at least $30 per month in tips. If wages and tips do not equal the federal minimum wage of $7.25 per hour during any week, the employer is required to increase cash wages to compensate.”

If you never knew, some workers get a minimum wage of $2.13 per hour, most of them working as restaurant and bar servers. For more than 29 years there is a debate in the United States that if a person earns at least $30 per month in tips and the sum evens out with the regular minimum wage, the $2.13 wage is acceptable. This law is absurd and unfair as it takes a person’s hard-earned tips into account, tips that should be theirs only, earned with fair and hard work. Workers have to depend entirely on the kindness of customers to pull through.

Therefore, the “subminimum wage” section of the Fair Labor Standards Act (FLSA) has to be reviewed, to ensure the financial safety f of every single person who pays taxes. Hospitality workers deserve it.

One mom from Austin, Texas, decided to raise the voice and address this issue.

She posted a video on TikTok and explains that when federal taxes, social security, and medicals are taken away, at the end of the working period, one could be left with barely $10!

Aaliyah Cortez has a child to take care of and she’s expected to be exceptionally kind to customers to earn enough tips to get a satisfying salary. After working for over 70 hours at a bar in Austin, the mom couldn’t take it anymore and she made a TikTok video to show the world the day federal policies mistreat her.

She shows her working for 70.80 hours that week. She was supposed to earn $150.11, but after her social security, Medicare, and Fed Income Taxes were deducted, all she had left was $9.28.

She explained that after all deductions, she always earns between $4 and $11.

“I cannot afford to live off of $2.13 an hour, so I solely rely on the generosity of my customers.”

The goal of the video wasn’t to send a message that she is entitled to her customers’ kindness, but she simply recorded it to present the cruel reality hospitality workers have to deal with.

Every single day, she serves hundreds of people, and she earns almost nothing at the end of the day, except for her tips. Therefore, she asked people to always give tips to servers, waiters, and bartenders as policies have mistreated them badly.

“It’s tough being a working mom for me right now just because I’m going through a custody battle. I would love to spend time with my son, but I have to make a living so we can have a good life once the custody battle comes to an end.”

Her post opened a debate online, with some people pointing out the fact that she earned $708 in tips, which belonged entirely to her. They explained that many people with regular jobs that pay up to $14 per hour could not make that much.

Yet, Aaliyah quickly defended herself, adding that those earnings are not stable, so she could count on them, and she depends on numerous factors, like the flow of customers that day, the impression she leaves on them, their goodwill.

She adds that is hard to depend on other people’s generosity. Next week, she might get only $ 35. What could she do then?

“Honestly, every time I open a check I just chuckle a little bit. My coworkers and I will compare checks to see who got the least amount and we’ll just laugh because it’s ridiculous how little we get paid. I would just like to add that I love my job and I’m fortunate enough to make enough to get by, but it’s tough to think that if an emergency comes up it could really hurt me financially. I just wish we all had stable and consistent paychecks.

It’s important to tip because we literally rely solely on those tips. We’ll be greatly appreciative and it’s just nice to be compassionate and understanding that this is just how laws are set up, and if you’re going to restaurants that do abide by these laws, you are feeding into the broken system. We don’t like relying on the customer but until the laws can get changed, we still need to be paid. Whatever you do, Don’t. Forget. To tip.”