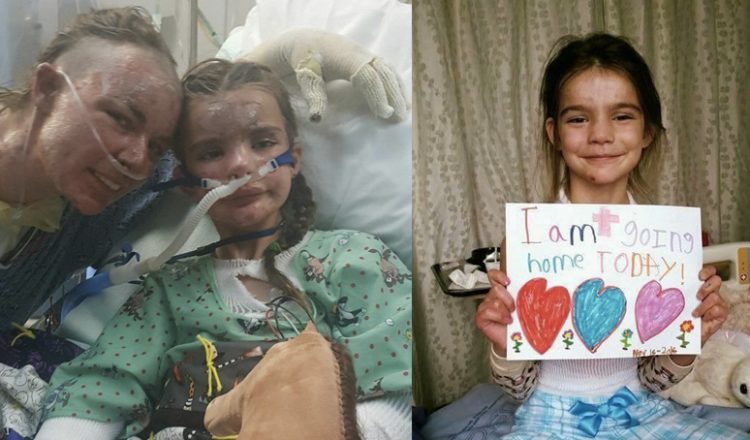 This mother risked her life to save her three children from a house fire. Her sacrifice left her with third-degree burns over half of her body.

Angel Fiorini woke up around midnight to find herself struggling to breathe.

“I felt really hot and I was breathing but it was like my lungs weren’t working properly and I couldn’t take a decent breath.” she told The Sun.

Fighting to get out of bed, Angel finally reached her bedroom door. When she opened it, the sight was every parent’s nightmare – her home was completely engulfed in flames. Angel knew that wasn’t the worst of it, her three children, Gianna, Vinnie and Rosalie, were in danger.

“It was really hot already, even though it was on the opposite side of the house,” Fiorini, 33, of Spokane, Washington, tells PEOPLE. “I just knew I had to get out.”

She went to her children’s room and grabbed her two youngest in each arm. Fighting the smoke and heat, Angel was able to get the children outside to safety.

When she looked back at the house, it was overwhelming. The black smoke was taking over and the fire was spreading very rapidly. She knew her oldest daughter, Rosalie (8) was still trapped in the home. Fiorini turned to her faith in God and ran back into the house.

“There was no way that I was going to stand outside my house watching it burn with her inside. There was nobody to call for help, and I knew that I was the only one who knew where she was in the house, and waiting wasn’t an option.”

The smoke was so thick that Angel couldn’t see. When she reached her living room, she had to lay on her stomach and “military crawl” to reach Gianna’s bedroom. She let her hands be her eyes and she searched for the door.

Finding little Gianna, Fiorini grabbed her and dragged them both toward the front door of the home. The fire was so intense that she could feel her skin melting from her body.

“I pulled her to the ground and dragged her beneath me out of the room and along the corridor to get to the front door,” Angel said.

As the pair made their way to the front door, Angel passed out just shy of it’s safety. Thankfully, retired firefighter and EMT Matt Burson happened to be driving by and saw the fire. By a miracle, he saw little Vinnie going back towards the blaze. Matt instantly thought it must be for his Mom.

The former firefighter grabbed the boy and moved him to safety before crawling into the burning house. About eight feet in, he saw Angela and began dragging her to safety.

“And I swear, right at that moment, Gianna let out a moan. It was like a sign from God.” He pulled his shirt over his head for protection and went in. “I found Gianna three feet from where Angel had been,” he says.

When she regained consciousness, Angel saw her home turning to ash. Everything she had worked for was gone. She and the children were safe, though Gianna and she needed serious medical care.

“Gianna and I had skin charred, melting, hanging off of our arms and our hands,” Fiorini remembers.

Recovery At A Specialty Burns Center

Though both Angel and Gianna suffered third-degree burns to their bodies, Gianna’s injuries were not as severe as Angel’s.  Both were air-lifted to the burns center at University of Washington School of Medicine’s Harborview Medical Center.

Her ordeal being so traumatic, Fiorini suffered a pulmonary embolism as she was being admitted. Doctors sedated her, wrapped her body in thick gauze and placed her on a ventilator.

“I remember waking up and being really angry that I couldn’t move my arms or talk,” she says. “I remember trying to tell the people around me that I needed my arms down, and I needed something to drink. But I couldn’t say anything. All I could say was, ‘Argh!’ ”

The recovery from the burns alone was massive for Angel, but her fight wasn’t over just yet.  Due to her weakened state, she also contracted pneumonia, sepsis, and then suffered multiple organ failure which led to a 10-day coma. Doctors were unsure of whether she would recover at all.

But Angel was determined to be there for her children and proved her will to live. Just five weeks after her trauma, she was discharged. But where was “home”?