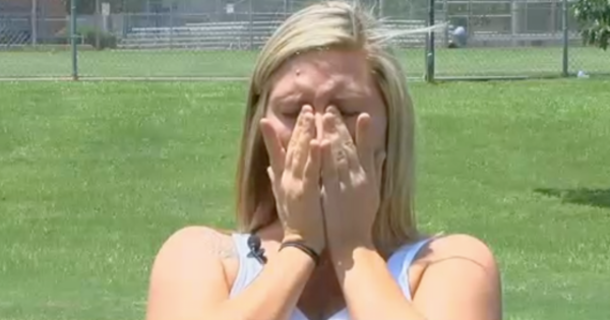 When mother Sydney Zimmerman showed up early to pick her little boy up from daycare, it was immediately clear to her that something was seriously wrong.

The Phoenix City, Alabama mom typically picks up her 22-month-old son Slade from daycare later in the day, but she knew the little boy would love the surprise.

“He could have overheated and died,” said Zimmerman. Zimmerman immediately grabbed her son and ran from the daycare before calling the police.

According to reports, right before officers arrived, daycare owner Cindy Duman called Zimmerman to let her know that a daycare worker, Mary Pruett, had put Slade in the closet because he did not want to go to sleep.

Now that the dust has settled, Zimmerman says she has a feeling that this was not the first time her son had been locked inside a closet.
After launching an investigation, authorities later informed Zimmerman that they discovered the daycare had been operating without a license.

According to WTVM, Zimmerman is now fully planning to press charges against the daycare for child endangerment, child neglect, and operating a business without a license.

“I don’t wish this on anyone,” said Zimmerman. Several stations shared this heartbreaking story on Facebook, where many commenters agreed that the daycare owner acted in a completely inappropriate manner.

“It’s not like it’s posted im sure she didn’t. Tell them oh by the way I don’t have a license really no good mom would go for that so the mom can’t be the blame for someone else action mom wasn’t there if she knew I don’t think she would have left her baby,” one commenter wrote.

“Who gives a crap if she was licensed or not. There are some really good folks who babysit and aren’t licensed through the county. I babysit occasionally for friends and family and I’m not licensed! The matter at hand is the fact that this particular person was mistreating a young child. Should be held accountable for her actions like any other person!” another added.
“Oh dear God,I would have tore this evil woman apart. Poor baby, alone in the dark in a hot closet,” one woman wrote.