No matter if you believe in angels or not, this story about Chelsea Banton’s will warm your heart. Chelsea had a challenging life when she was born —she was five weeks prematurely and the majority of her childhood was spend battling her health issues.

However in 2008, her mother, Colleen Banton, learned that tragically, her 14-year-old daughter didn’t have much time to live.

Colleen loved her daughter’s bravery as she faced a lifetime’s worth of diseases. However Chelsea’s condition was bleak, doctors were giving up faith. Sadly Colleen chose the heartbreaking decision to take her off of her life-support system.

Then an hour later, an image appeared near the door to Chelsea’s room.

A hospital staff member discovered it on a security camera and called Colleen over to see it.
“It was an image of an angel,” Colleen said. 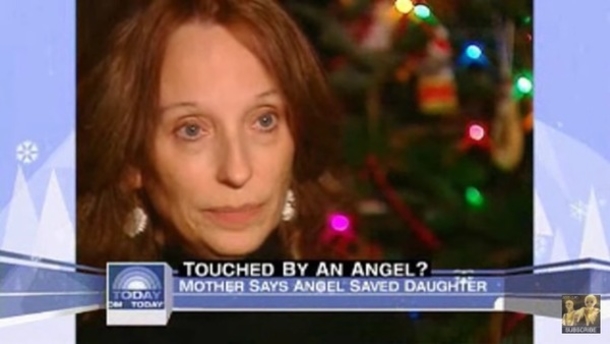 The awe-struck mother didn’t know whether the angel had come to take her daughter to heaven or was there to save her life.
That is, until another miracle happened — Chelsea slowly started to recover.

After two months in the hospital, Chelsea was finally able to go home to her family. Her doctors were amazed, as they rarely see such a speedy recovery.

Thanks to the miraculous turn of events, Chelsea celebraed her 15th birthday with her family.
“It’s a miracle. And I’m learning not to take things for granted,” mom Colleen said with tears in her eyes. “This will be a special birthday. Who knows? It could be her last. But she’s come this far, and I’m not giving up now.”

That was in 2008. And thankfully, her 15th birthday wasn’t Chelsea’s last.
Chelsea fought hard for another seven years. And although she had to leave this world far too early, she was still managed to spend seven wonderful years with her family after that special day in the hospital.