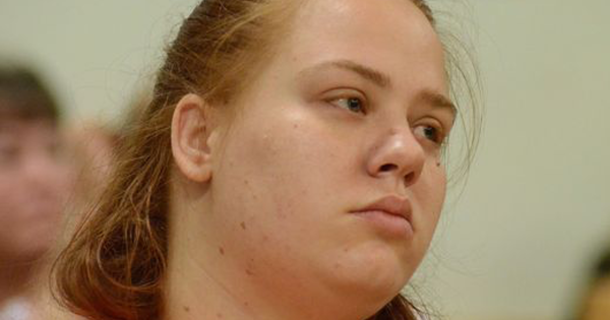 A mother from Michigan and her boyfriend have been accused of abusing, starving, and torturing a 4-year-old boy, who was placed and trapped in a closet

According to USA Today, when 23-year-old Megan Schug took her son, Maloyd Gaines, to the hospital in March, the little boy seemed to be so sick that doctors thought he might pass away.

“He was very thin to the point he was very sickly,” said Michael Zaleski, a case worker for Children’s Protective Services.

“He had abrasions and cuts and rashes all over his body,” he added. “His toes were blackened and swollen and his hands also were swollen.”
In court, Zaleski told the judge that when he visited Schug’s home, he found a small couch and a small TV but no other furniture in the house.

Schug, who lived in the house with her four children and her boyfriend, 35-year-old Issac “Mike” Miller, reportedly kept no beds in the home.

On the second floor, Zaleski said he found a strong smell of human waste.
Battle Creek Police Department Detective Ryan Strunk testified that when he investigated the home later, he found it to be in the same condition.

It wasn’t until the little boy was rushed to the hospital that authorities finally discovered what Schug and her boyfriend had been doing to him.

“At nighttime, they would lock him in the closet and sometime in the morning open the closet,” said Strunk.
Schug also told investigators that as a punishment, her children were forced to hold up a wooden crate, but when Maloyd refused, he was beaten with one of the wooden slats from the crate.

During an interview in May, Schug also reportedly told police that she would often withhold food from her son, and at one point, he was forced to urinate and defecate in his clothes.

Miller reportedly also liked to hurt Maloyd and his sister because they were not his biological children.
On the night that Maloyd was finally taken to the hospital for treatment, he was reportedly on the brink of death.

Strunk said in court that Schug reportedly told him that Maloyd was finally taken to the hospital because “he was unable to stay awake and she believed he was in extreme danger.”

At this time, both Schug and Miller have been slapped with child abuse and neglect charges for the way they treated Maloyd.