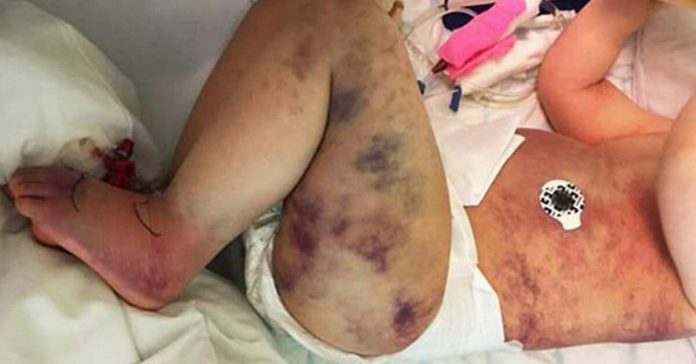 Don’t you just love playing outside with your children on a nice day in the summer, or even just watching them play.

They love to explore, especially when they are still toddlers and just beginning to walk. And, they’re not afraid of anything.

As parents, we’re all used to the little bumps and scrapes that can happen, even an occasional bug bite. But, there are actually some life-threatening dangers outside that we should all be aware of.

Here’s how one of the simple joys of summertime turned into a horrific scenario for one young mother.

Elisabeth Nordgarden was outside with her three-year-old son, Kristoffer, enjoying a beautiful summer day in her garden.

Little Kristoffer loved to run barefoot through the grass, exploring and learning about nature.

Of course, not wearing shoes meant that there was always a possibility of him getting bitten or stung by something. So, Elisabeth wasn’t overly concerned when her little toddler came running to her with tears running down his face.

Elisabeth comforted her son, trying to calm him down, assuming that he had a scrape or had been stung by a wasp or bee.

But, after a few minutes, his little foot started to turn blue. She quickly called emergency services.

Both an ambulance and a helicopter were on the scene within minutes.

Paramedics told Elisabeth that it was a viper bite, and little Kristoffer was rushed to the hospital, where he was given an antivenom immediately.

At first, he showed improvement. But, suddenly, things got much worse. Little Kristoffer’s intestines were bleeding internally, causing almost his entire body to turn blue.

The viper’s venom had destroyed nearly half of his blood cells, and he was rapidly losing weight. Elisabeth could only watch in horror and disbelief as her little boy was fighting for his life.

Luckily, after two weeks in the hospital, Kristoffer finally recovered, and was able to go home. Elisabeth now wants to warn all parents about the dangers of letting their children play outside, especially in high grass, without shoes.

She stresses the importance of children wearing boots when playing outside in the yard.

Sadly, Kristoffer is not alone.

Many children suffer from snakebites every year, and their little bodies will suffer the consequences more severely than adults, often resulting in fatalities.

Hopefully, the lesson learned by Elisabeth and little Kristoffer will prevent other tragedies from happening.