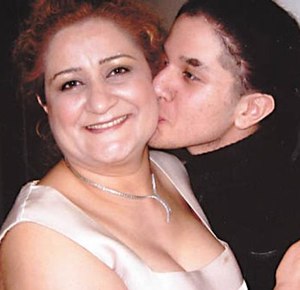 A mother whose son was stabbed to death by four members of a hooded gang plans to sell her family heirlooms to help his killers.

Fatemah Golmakani, 56, also said she wants to “hug and kiss” them and “tell them that someone loves them”.

Her son Milad, 22, suffered 14 knife wounds to the neck and back when the four youths ambushed him as he played football last April.

Sean Hutton, Sean ­Ferdinand and Mohammed Hashi, all 19, and Lij McSween, 17, were given life sentences at the Old Bailey last month after being convicted of his murder.

But Ms Golmakani said she plans to sell her diamond earrings, her grandmother’s watch and a crystal ­chandelier that has been in her family for more than 200 years to help them while inside.

She said she wants to take them “on trips to Europe, to eat good food, wear nice clothes, show them what life is really about”.

Ms Golmakani added: “I want to replace their knives and guns with flowers. I want to bring their humanity back even if my son is gone.

“Maybe if I hug or kiss, it will wake them up.”

Iranian Ms Golmakani, who moved to Britain 18 years ago and lives in Swiss Cottage, North London, is setting up a charity in her son’s name after his death in Kilburn.

The Milad Trust will support pupils who fall behind in school, providing them with careers advisers.

She said: “This charity will be a present to the killers.

“It will say to them, ‘Hey, you’ve ruined your lives and mine and my son’s but, if nothing else, here’s this to help others like you, and to help you’.”