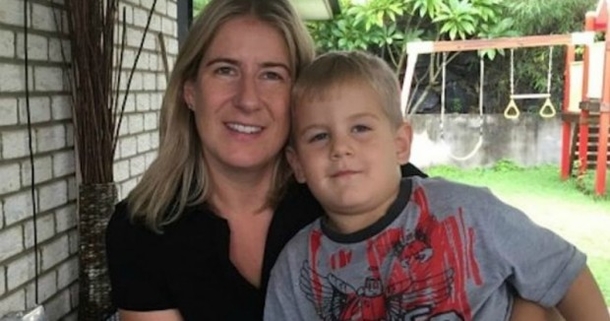 After an average summer afternoon at the pool, one mother noticed her son began acting out of character. When his unexpected behavior persisted, she panicked and rushed him to the hospital, where she recieved startling news about what he was experiencing. Now this mother-of-three has a warning to everyone about a little known, yet fatal, risk the pool poses after you’re out of the water.

Emily Toxward took her three small children, who are all under the age of five, to their community pool. If managing three tiny tots in and near the water didn’t pose a big enough danger for the Australian mother, the unknown risk she was about to realize made it all the worse.

Toxward’s youngest, 3-year-old Oliver, was playing on the patio at his mother’s side, while she supervised her older two children swimming in the water. As toddlers have a tendency of doing, in a split second of mom’s distraction, he got too close to the edge and fell in the water. As he was flailing his arms, Emily jumped in fully clothed to save her little one. Back on the patio, she held him tight in her arms and comforted him with loving words, happy he was safe — or so she thought. In a matter of hours, the mother would soon find that the worst was yet to come.

The family left the pool for home, where they went about their evening routine. Emily mentally beat herself up for the next few hours for having failed her son by taking her attention off him for just a split second. She couldn’t rid herself of the guilt when putting him to bed, especially since by that point he started to seem a little feverish. She brought him in bed with her and noticed his temperature kept rising and he became increasingly lethargic.
 Facebook Twitter Pinterest

She had a mother’s instinct something was seriously wrong with her son, more than a case of the flu coming on, and rushed him to the hospital. Emily thought that she had saved Oliver from drowning, only to learn he was currently drowning, hours after the fact. He had aspirated a little water earlier in the day when he fell into the pool, which was still in his lungs.
An x-ray proved that what he was experiencing was “dry drowning,” which is fatal if not treated immediately. Although rare, it’s something that can happen easily, as it only takes swallowing six tablespoons of water to “dry down,” as was the case for a South Carolina boy who died from the condition after simply playing in the pool.
The key is knowing and recognizing the symptoms of the condition, since urgent medical attention at the onset is imperative to survival.

These behaviors can set in anywhere from hours to days after being at the pool, sometimes even 48-72 hours after swimming and swallowing even a small amount of water. Luckily for Emily, she trusted her maternal instincts and acted fast, and her child is alive today because of it.
Many of us often think the dangers of deep water are over after leaving the pool, but that is unfortunately not the case with dry drowning. While we can do our best to prevent our kids from playing in such a way that causes them to swallow water in the first place, it’s nearly unavoidable. Knowing symptoms and treating them as a medical emergency is more effective than putting your child in a protective bubble for playtime. Have a fun summer and stay safe!